Santa Maria Maggiore is proclaimed by most scholars as the second most beautiful church in Rome. Only St. Peter’s Basilica itself is said to be more grandiose. One of the four major basilicas in Rome, it was the first church to be dedicated to the Virgin Mary and possesses a rich history. Pope Sixtus III built the present church in 431 AD to honor Mary, but two significant buildings preceded it at the site. Interestingly, they too were built to honor great women. The first building at the site stood in honor of the Roman goddess Juno. Built in 375 BC, it served as a pagan site of worship for hundreds of years before its destruction. 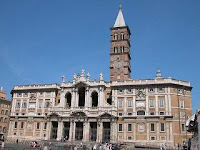 http://tesoridiroma.altervista.org
Santa Maria Maggiore
Much more is known of the second temple at the site. In 358 AD, a wealthy, heirless patrician decided to donate his fortune to the church. After informing Pope Liberius of his intent, the two were visited by the Virgin Mary in their sleep that evening, who informed them that she would give them a sign. The next morning, August 5th, Pope Liberius woke up to find snow fallen on the Esquiline Hill. Taking the snow in the heat of the summer to be the promised sign, Pope Liberius drew a plan for the church in the miraculous snow. Later, he used the donated money to build a church on the site dedicated to Mary. It stood for less than 80 years, after which it was replaced by Pope Sixtus III’s present church.

Santa Maria Maggiore complex structure represents every major time period between the 5th and 13th centuries. The first feature which stands out prior to entry of the basilica is the bell tower. Built in the 1370’s, its height of 75 meters makes it the highest in all of Rome. Standing on top of the Esquiline Hill, the tower overlooks all of Rome. The façade was designed in 1743 by Ferdinando Fuga, which covers a 14th century mosaic which was part of the previous entrance to the church. Also included in the entryway to the church is the Holy Door, its use reserved strictly for holy days.

Upon entry of the church, the expansive central nave stretches out in front of the viewer. Its ceiling was decorated in the 1400’s with the first gold brought back to Europe from the New World. Lining the nave are beautiful mosaics dating back to the 400’s when Pope Sixtus III built the church. They depict Old Testament stories of the history of the Israelites and are arranged chronologically from the front of the church to the rear. Dominating the front side of the nave is a triumphal arch covered with intricate mosaics arranged in four rows which depict scenes from Jesus’ childhood. Beneath the triumphal arch, is the high altar which is above a relic which contains five pieces of wood said to be from the manger in which Christ was laid in Bethlehem.

www.wga.hu/ html/p/pannini/
Central Nave
Behind the triumphal arch is the central apse, whose mosaic, dating to the late 13th century, is absolutely incredible. Mary and Jesus sit together at the center of the half-dome enthroned. Below the mosaic are four pointed windows, which are the earliest examples of gothic architecture in Rome. 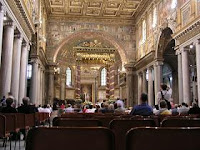 www.euxus.com/ rom-kirchen.html
Triumphal Arch and High Altar
Lining the central nave are the Sistine Chapel, the Pauline Chapel, and the Sforza Chapel. The Sistine, or Holy Sacrament, Chapel was built in the 16th century, and each year, on August 5th to honor the miracle of the snow, white rose petals are showered from its ceiling. It contains a statue depicting St. Cajetan holding the Holy Child by Bernini, whose tomb is also in the church. The Pauline Chapel lies on the left side of the central nave, and was built by Pope Paul V in 1611. It contains an icon of the Virgin Mary said to be carried by Pope St. Gregory through the city to drive out the plague in 593. It was last used in a procession to battle a deadly outbreak of disease in 1837 when Pope Gregory XVI carried it to drive cholera out of the city. The Sforza Chapel was designed by Michelangelo in the 16th century and is adjacent to the Pauline Chapel. 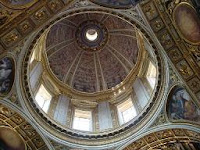