Augustus and his agenda

Augustus or Caeser Augustus was known by many names such as Gaius Octavius, the name given to him when he was born on September 23, 63BC. He was the great nephew of Julius Caesar and it was Julius who helped launch Augustus’ career. Even at a young age of 12 years old, Augustus was giving public speeches. Most importantly upon Julius Caesar’s assassination, in his will Julius Caesar adopted Augustus as his son and made him his chief personal heir. Therefore, at Julius Caesar’s death, Augustus at only an age of 18 years old had to make the choice to either take this inheritance or not. He decided to take up the challenge and from that point on was known as Gaius Julius Caesar Octavianius or Octavian for short. Mark Antony did not welcome this because he thought he would be the next ruler, but with Augustus’s perseverance and patience, he gradually began his quest to win the allegiance of the public. Augustus let go of his grudge against Mark Antony and formed an agreement with Antony and Lepidus to form the Second triumvirate, the first being the one with Julius Caesar.

However, the triumvirate did not last for long as power began to shift between the three and at 32 BC it officially ended. By that time Augustus had gradually built up his image of being the best candidate to be the next ruler. He requested the deifying of Julius Caesar, which in turn resulted in him being the “Divi Filitus,” the son of a god. He also built statues to show his grandeur and had many military successes to compete with Antony’s military seniority, such as winning foreign wars in Ilyricum and Dalmatia to protect the borders of Italy. Noticing a weakness in his opponents, Augustus defeated and took the land of Lepidus and parts of Antony’s. Antony now had taken allegiance with Cleopatra, which caused Augustus to declare war. He eventually defeated Cleopatra and Antony at the Battle of Actium, which led to them committing suicide. When he captured Egypt and seized Cleopatra’s treasures, he was able to have the needed funds to become the master of the Greco-Roman world.

When he came to power, he had to decide what kind of government he wanted. He came into power during a time of much civil war and disorder that only provided more evidence that the old republican form had failed and that an absolute monarchy was needed. However, he knew that going against the Roman tradition would create much hostility. Still remembering the cause of Julius Caesar’s assassination, he knew he had to treat the Senate with care and consideration. His idea of a new government system, the new order, was better supported because of his clever decision to proclaim that he was transferring the power to the Senate and the people. However, before his announcement, he had already made deep connections with the members of the Senate and had much influence and control. The Senate gave him power or a special imperium for a period of ten years, which was quite unusual for that time. With that power, he was able to nominate Senate members. The senate also gave him the name of Augustus. Augustus was a name that had never been used to call a man because of what it represented. It comes from the word augury which is a practice of reading omens; therefore, being named this meant the belief of his superiority. He was also titled Imperator, also known as Emperor in modern times. However, he did not use this title but preferred to be called the Princeps or the first citizen. This way he stayed away from any word that would have any connotation of monarchy or supremacy. He was also awarded many other positions of power such as the power of tribune, which was the title of the defender of the poor and allowed him superiority over proconsuls and was called the “father of the country.” In 12 BC upon the death of Lepidus, one of the triumvirate, Augustus became the official head of the Roman religion, the chief priest (pontifex maximus). 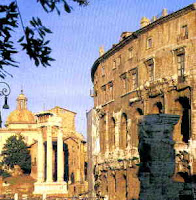 During his rule, he accomplished many things for the Roman Empire. He wanted to improve religious beliefs. He revitalized the Roman religions by building many buildings and monuments to worship the Roman gods. He wanted to bring back the glamour of Rome and help the poor. He built many public buildings and monuments at his own expense such as baths, theaters, aqueducts, and better roads to promote better trade. Lastly, he wanted to increase morality by promoting marriage, family and childbirth. One of his famous quotes was that he “he found Rome brick and left it marble” because he literally and metaphorically had accomplished this.

He later created a new financial system that completely changed the administrative structure of the empire – a central treasury. He implemented two direct taxes, the poll tax (all adults) and a land tax but these were low and allowed for trade to flourish. He also created a military treasure, a fire brigade, and a police force.

Augustus is known as one of the greatest administrative genius of history. His reign was from 27 BC to 14 AD. He was able to reorganize almost every part of Roman life and transformed the dying republic to a stable expanded monarchic regime that had prosperous trade and a period of pax romana or Roman peace. His cleverness allowed him to rule under autocracy while still being supported by the people. It was with his clever use of propaganda through writers, monuments, statues and any other means possible that allowed him to remain in power so long and accomplish so much. Throughout his career, he was able to inderectly influence and control the decisions made while still having the public’s support and adoration.