The Fora Romana was symbolically the center of Roman government and as such, the perfect location for emperors to erect buildings with a propagandistic intent. In looking at the sites today, though mainly in ruins, one can still feel the overpowering influence they exert. To an ancient Roman the overpowering structure of the forum would have left the observer with little doubt of Rome’s supremacy, humbling him before Rome’s grandeur. With both religious and governmental buildings placed in the Forum, the location served as a center to all that represented Rome. Buildings erected within the Forum therefore served as central symbols of Rome, and due to this politicians could shift perception of the empire by erecting monuments in the Forum which gave the location immense political importance. 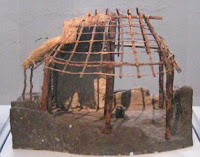 The original inhabitants of Rome settled on the Palatine. This was a prime location as it was close to the Tiber, but still elevated as to protect the settlement from the rivers frequent flooding and foreign attack. Upon original inhabitation the area of the forum was initially a swamp, and its use was mainly as a necropolis, with tombs dating from the 10th century BC. Eventually however, the room on hills was at a premium, and thus some inhabitants started to move down into the Forum, living in the round Etruscan style huts. The first step towards making the Forum what it is today however was undertaken around the 6th century BC, when the Tarquin kings, with knowledge of drainage gained from the east, built the Cloaca Maxima, or great drain. This drained the inhospitable marsh, and along with an initial paving in that period, made the location well situated to become the center of an expanding Rome.

Though these buildings were originally created before imperial Rome the versions today, save the Lapis Niger, are usually reconstructions. This is due to fires which were dangerously common in Rome, as well as just general reconstructions by politicians wanting to show their benevolence and gain favor with the populace.

The Lapis Niger is an area of bluish grey stone, and its origins are permeated with myth. The commonly held belief is that it is the tomb of Romulus, while there are other opinions that it holds the tomb of the shepherd who discovered Romulus and Remus. There is no evidence of a tomb however, and thus it is somewhat of a mystery. While there is currently no definitive answer as to the area’s true purpose, within the vault beneath the marble slabs there in the earliest known Latin writing, dating from the 6th century BC. The writings apparently detail some sort of ritual and though the Lapis Niger has unclear origins, the presence of these writings makes it a very important monument. 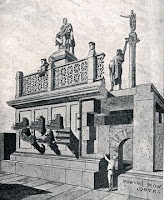 The Rostra is an elevated platform from which the early kings of Rome gave their speeches, an early example of the Forum as political center. Along its front one can see small square indentations, which are from occasions where the prows of enemy ships were stuck into the Rostra by the metal beams which ran down the hull. In this one sees the reoccurring Roman tradition of bringing symbols of conquests back to Rome in order to gain support for foreign campaigns, a practice which reached its height in the Triumph. The Roman conquerors needed these symbols of conquest in order to give the Romans a sense of accomplishment in waging wars which were often far detached from the lives of an average Roman and his security. This is also the location from which Marc Anthony gave his famous speech defending Caesar after his assassination.

Temple of the Vestal Virgins

The vestal virgin tradition was a sacred one to the Romans, with the vestals an icon of purity. Their charge was to keep the flame in the temple of Vesta from extinguishing, as Rome was supposed to be impervious as long as it remained lit. The appointment, which one gained in early childhood, was for thirty years, 10 spent learning the rituals, 10 spent performing them, and 10 spent teaching them to the next generation. During this period, strict chastity was required and if a virgin was even accused of chastity she would be buried alive unless a sign from Vesta herself was observed in her defense. The male would be flogged to death.

The temple, of which only three columns have been reconstructed, was circular in shape, a style inherited from the round shape of the early Etruscan huts in the area. Along the top there are icons representing various acts of sacrifice. Inside the temple there were deep pits which held the offal left over from the animal sacrifices performed in the temple. Also in the temple there was a cache holding various treasures, one of which legend says to be the Palladium brought over by Aenid when he fled Troy.

The temple of Saturn is second only to the temple of Vesta in age, with its origins dating back to the Tarquin kings. As was mentioned, the version of the temple that stands today was an imperial rebuild and the massive granite portico that remains dates to the fourth century AD. In addition to serving as a temple, it was also the treasury of empire, and a location for the posting of public documents. Within the temple was a statue of Saturn brought out for Triumphal processions. 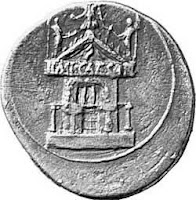 This was the senate house, moved to its current location by Julius Caesar. It is interesting to consider the message sent by Julius moving the position of the senate house to make way for his massive building projects. Within the curia, the three-hundred senators met for their formal meetings, with the president of the senate sitting in the back of the room.

The Curia is so well preserved due to its conversion to the Church of Saint Adriano. This conversion is responsible for the remarkable shape it is in now, just as many other buildings survived by being turned into churches. The church, as we will see, was responsible for much of the preservation, but also destruction, of the Forum.

A basilica in Roman times was an economic and judicial center, built for oratory and protection from the elements. This basilica would likely have had wooden removable barriers so that more cases could be heard at one time. If one looks at the steps of the Basilica, there are still the remains of game boards carved into the marble, evidence that the Basilica was very much a public space.

This is one of the many public works Caesar had built, which put him into an enormous amount of debt. The payoff for these expenditures was substantial though, such that upon his self appointment to dictator for life there was little opposition from the lower classes, to whom Caesar was a hero. The tradition of massive expenditures to win over the population via building projects started with Caesar, and was continued by most of the later emperors.

Temple of the Divine Julius 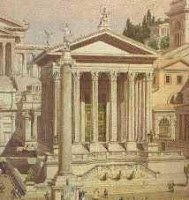 To understand the significance of the temple, the Roman climate around the time of its construction needs to be considered. The beginnings of the rift that was to cause the rise of an empire can be traced back to the feuds between the Optimates and the Populates. These two groups can be put roughly into the category of conservatives and populists, one wanting supremacy of the senate and headed by Sulla, the Optimates, and one wanting more involvement of the people and headed by Marius, the Populates. This rift was brought to the brink of violence when Sulla threatened to march on Rome, resulting in him being proclaimed dictator for ten years, a position normally given only in times of emergency for a six month period. Furthering the discord of the period was Spartacus’ slave rebellion, which was put down by Crassus. Crassus, a Populate, along with Pompey, a protégé of Sulla, were co-consuls and potentially set to erupt into another feud such of that of Marius and Sulla. They were instead brought into an alliance though by Julius Caesar, who was running for Consulship and agreed to fight for their political views in exchange for their support. Caesar was easily elected consul, and upon the end of his term, helped Crassus and Pompey again obtain the consulship. The alliance of tree, known as the First Triumvirate, fell apart however with the death of Marius and the Optimates pushing Pompey to try and impeach Caesar. As a result, when Caesar tried to return to Rome after his military campaign in Gaul a civil war erupted, which Pompey decisively lost. After this victory, Caesar returned to Rome and granted himself dictator for one year, ten years, and finally for life. Though Caesar had the large-scale support of the population in these actions, he understandably angered too many senators in and was subsequently assassinated. This vacuum sent Rome into a violent power struggle from which Augustus emerged on top after numerous political twists and backstabs. Augustus gave his powers back to the senate, but the senate returned those power (or was maybe forced to), and thus Augustus became the first emperor of Rome.

After all those tumultuous years during which Roman government shifted from a republic to an empire, Augustus had to establish his legitimacy to the people. The most important symbol of this was the Temple of Divine Julius. In a completely unprecedented action, Augustus had Caesar deified, something which had never been done in Rome save for the myth of Romulus. This practice of deifying politicians in order to legitimate one’s line is a practice later repeated many times, and its effectiveness should not be underestimated.

Temple of Vespasian and Titus

This was another deification temple built by Domitian to honor his brother Titus and father Vespasius. Vespasius came to rule after the two terribly unpopular emperors Nero and Caligula, which was then followed by the chaotic “Year of Four Emperors”. This time of great chaos was finally brought to order by Vespasius. After that fiasco Romans would plausibly be having great doubts in the effectiveness of the rule by emperor, so again we see this deification ritual as a way to reestablish the legitimacy of the system after a time of great chaos.

With the downfall of the Roman Empire there was insufficient infrastructure in Rome to maintain the forum. Following a series of natural disasters which broke the sewage system, the roman forum began to fill with sediment and by the middle ages was a husk of its former glory. It was no longer known as the forum, but instead as the Campo Vacino, or cow pasture. The arches were halfway submerged in muck, and some of the structures were incorporated into medieval fortifications.

The greatest devastation took place however during the middle ages, when the site became a quarry for large-scale papal building such as St. Peter’s Basilica. This was a terrible time for the forum, but it shouldn’t be forgotten that financing the original forum was in large part due to spoils of was and sackings of foreign treasures, so the forum becoming a quarry for the church does seem a particularly Roman end.

The Roman forum is a monumental work of propaganda whose scope seems unmatched in the modern world. Today as one explores the great site, it seems hard to get a sense of continuity within the jumbled ruins. In a way though, that is the point of the Forum. The Forum exerted its power over the population by being a canvas with which politicians could give the message that would bring the most stability at that time, and thus the piecemeal appearance of the Forum is a reflection of the ever changing demands of the populous.

http://intranet.grundel.nl/thinkquest/
Posted by Lisa at 5:44 PM