The Mythical Foundations of Rome

Rome was named after Romulus; a man whose father was a god, whose mother was a Vestal Virgin sworn to celibacy but gave birth to twins, and whose body was never buried because it just disappeared into a storm. This is the truth. The tale of Romolus and Remus, children of the maiden Rhea Silvia and the god Mars, spins a story that seems strange and even absurd at times. What is most bizarre about this story is not the actual tale, but the fact that it is widely accepted as the truth. In the eyes of the Romans the mythological foundation of Rome, based on the story of the gods, is the sole truth of the birth of their city. 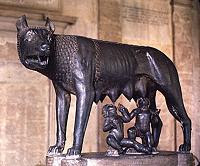 Rome was founded and named after twin brothers, Romulus and Remus, children of Rhea Silvia who was the daughter of Numito. Numito and his brother Amulius inherited the kingdom Alba Longa and became joint rulers of the land. Amulius, the greedier of the two, was not satisfied sharing power with Numito so he killed his brother and made himself the sole ruler. To further secure his place as sole ruler, he also killed Numito’s sons, the only competition to his throne. Out of respect for his brother, Amulius left Numito’s daughter, Rhea Silvia, alive. To ensure that she would never produce any heirs to his throne he ordered her to become a Vestal Virgin. A Vestal Virgin is a holy priestess of Rome. There were six Vestal Virgins at a time and each one served for 30 years. These women were the most powerful of all Roman women. In return for this power, however, they were forced to take an oath of celibacy for 30 years by punishment of death.

According to the story, Rhea Silvia was raped by the god of war, Mars, and gave birth to two twin sons: Romulus and Remus. The king Amulius was furious. He imprisoned Rhea Silvia and ordered his servants to drown the twins. Out of pity, the servants placed the twins in a basket and tossed them into the Tiber River, giving the babies a slim chance of survival. The basket miraculously survived and washed ashore where it was found by a she-wolf who suckled the babies with her own milk and nurtured Romulus and Remus back to health. They were soon found by a shepherd, Faustulus, who took them into his home and raised them. 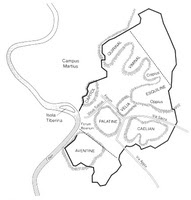 Once the boys reached maturity, they decided to settle their own land and create a town. Like most brothers, they argued frequently over not only who was to be ruler, but on where the city should be founded. Romulus decided that the Palatine Hill was the best place but Remus thought the Capitoline hill would be better. Unable to agree on a compromise, they asked the gods to give them a sign. They each climbed on top of the hill where they thought their city should be founded and waited for a sign in the form of a flock of birds. Remus was the first to see birds and claimed the flock of six that flew over his head meant the gods wished him to be the ruler of a city on the Capitoline. Soon after, a flight of twelve birds flew over Romulus’s head. Naturally, he assumed that this meant he was supposed to be the ruler of his city on the Palatine. The brothers quarreled and Romulus started to build his own settlement on top of the Palatine, naming it Rome after himself. Remus, in a fury, jumped over the walls that Romulus was building to prove to Romulus how weak his city was. Romulus killed his brother out of anger, showing all of his people that anyone who ever dared to challenge Rome would pay with his life.

Romulus’s city prospered, except for one small detail. No matter how hard they tried, the city could not recruit enough women to live in Rome. Romulus granted citizenship to many criminals and outcasts in order to populate his city, but women were a scarcity. Very few respectable citizens wanted to join his city. In a desperate attempt to bring women in, Romulus invited the Sabines, a neighboring people, to come to his festival in honor of Neptune. Naturally, the Sabines agreed, unaware of Romulus’s secret agenda. In the middle of the celebration, when the Sabine men were distracted, the Romans kidnapped the Sabine women and forced them become Roman citizens. The Sabine men were furious and decided to attack. When they returned to fight, they discovered that the women were torn between their fathers and their new Roman husbands and families. Romulus diplomatically invited all the Sabines to join his city and the two towns established peace. Romulus ruled until one night he mysteriously disappeared in a storm. Although no one knows for sure, the most popular explanation is that he was assumed into a cloud and carried off by his father, the god Mars.

There are many reasons that the Romans would have wanted to hold on to this somewhat unrealistic story as the story of their creation. One main reason is the birth line of their founder Romulus. His father was the god Mars which made Romulus half god. This brings a certain reassurance to all Romans that their city is blessed by the gods; after all it was founded by a man who was half god. Surely the gods must favor their city. Also, the story gives Rome somewhat of a reputation of ferocity and strength. Rome is so important and sacred that Romulus killed his own brother when Remus dared to threaten the city.

Regardless of why, this tale has remained the story of the creation of Rome since the day Rome was founded, April 21, 753 BC. Although there are a few variations to the story (some say that the wife of the shepherd was named lupa, wolf in Latin, and she nursed the children, others claim that Numito wasn’t killed but imprisoned) the core of the story has remained the same throughout the ages.