In ancient Rome, domestic interiors were often small and claustrophobic. Some Roman houses were very dark and didn’t even have windows. Romans used wall paintings as a way to open up and lighten their space. More specifically, they used frescoes. A fresco is made by first preparing the wall with 1-3 coats of mortar (a lime and sand mix), then covering that with 1-3 coats of lime mixed with finely powdered marble. While this plaster is still wet, pigments are applied in the desired design so as to create a painting that is actually part of the wall. The majority of ancient Roman frescoes are found in Pompeii and surrounding cities thanks to the preserving effect of Mount Vesuvius’ eruption. From excavations of such frescoes, art historians have defined four styles of fresco wall paintings. The four styles are divided both chronologically and according to certain defining traits. 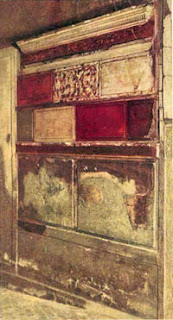 The first of the four styles is called Incrustation and dates back from 200 to 60 B.C. This style is identified by colorful blocks painted on the wall to resemble large marble slabs. Often, the plaster on the wall is molded into raised backs, adding to the so-called “marbleizing” effect. The idea of faux-finishes is something that has traversed the ages and is still a popular decorating technique in today’s houses. Although this style was often eye-catching and colorful in ancient Rome, it could often seem claustrophobic in the small rooms of Roman houses. 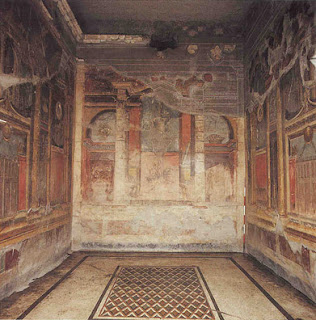 The second style, Architectural, dates from around 60 to 20 B.C. and serves to open up the limited space of Roman houses. This style has a distinctly realistic feel and tends to reflect everyday objects and scenery as they actually appear. Often times, illusions of windows and covered walkways lined with columns that looked onto imaginary scenes were framed by painted columns. Objects of daily life were depicted in such a way as to seem real, with metal and glass vases and shelves, and tables appearing to project out of the wall. A shift from public, realistic architecture to more private decoration is made as the third style develops. 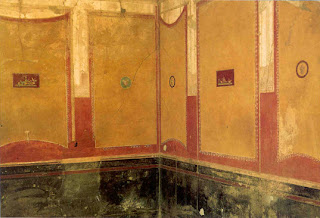 The third style, Ornamental, dates from 20 B.C. to 20 A.D. In it, there is a closing up of space. Illusion is rejected in favor of ornamentation. Largely monochromatic walls were often painted with a few pieces of architecture. For instance, candelabra or slender columns were used to divide the wall into separate sections. These sections then supported smaller, framed paintings, set up in the fashion of an art gallery. One benefit of this style of wall paintings was that it gave artists and patrons more flexibility to change their designs. Instead of having to re-paint the entire wall, an artist could decide to just change one of the framed pictures if he so desired. As time progressed, the style of wall paintings became even less architecturally realistic and more of a mixture of styles. The fourth style, Intricate, dates from around 20 A.D. to the fateful year of 79 A.D. when Mount Vesuvius erupted. This style incorporates all the elements of the earlier styles. It doesn’t resemble any believable space, but instead consist of a variety of architectural elements arranged in an unrealistic manner with unrealistic perspective, set against a flat background. Unlike the clarity of the third style “galleries,” fourth style rooms appear chaotic and filled to excess.

Roman houses often made use of a mixture of the different styles of wall paintings. Besides opening and lightening the walls, these types of frescoes served other important functions. For a contemporary visitor, the decoration allowed a social orientation of two types. First, it acted as a guide around the house. The distinguished guests would follow the fancy, colorful decoration, while the slaves and servants would stay towards the dark corridors. Second, the frescoes acted as a type of social orientation within the community. Both the number of frescoes and their quality indicated the level of resources and also the social aspirations of the household. The art of frescoes, as practiced over 2,000 years ago, proves to be both stylistically interesting and practically significant. Roman wall paintings developed into distinct styles over the years, recognizable by viewers today.