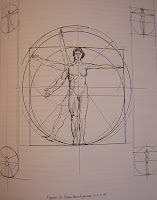 Attention to proportion and “symmetria” in the human body and Roman architecture is evident in the Greco-Roman tradition in architectural treatises, basilical structure, and philosophical discourse. Vitruvius’ “De architectura” is the only surviving ancient treatise on architecture, likely written between 28 and 23 BCE. In it Vitruvius outlines six fundamental principles of architecture, of which two primary ones are “symmetria” and “eurthymia.” “Eurythmia” means gracefulness that leads to visual harmony and is most often achieved through “symmetria.” Following is a quote translated from Vitruvius’ treatise: “Symmetria is the proportioned correspondence of the elements of the work itself, a response, in any given part, of the separate parts to the appearance of the entire figure as a whole. Just as in the human body there is a harmonious quality of shapeliness expressed in terms of the cubit, palm, digit, and other small units, so it is in completing works of architecture.” (Rowland, 25; Figure 1) Plotinus, a Roman philosopher who lived from 204 – 270 CE, is considered to be the founder of Neoplatonism. He said that, “we see something as beautiful when it matches the beautiful form that is ourselves, that is, soul. We detect beauty by kinship, whether beauty in bodies or beauty in ideas, virtues, or ways of life.” (Miles, 40) Awareness of symmetry and proportion in the kinship of the human body and architecture forms an inextricable link.

The term “basilica” refers to the function of a building as that of a meeting hall and in early Roman society was a symbol of authority and social order. Architecturally, a basilica typically had a rectangular base that was split into aisles by columns and covered by a roof. There was an immense central aisle, colonnades, windows above the central aisle, and often a niche at the end. Basilicas were often constructed according to strict proportional guidelines; for example, “the columns of basilicas ought to be made as tall as the porticoes are going to be wide. The porticoes should be one-third the area of the central space. . .” (Rowland, 64) Upon entering a massive basilica the individual will feel tiny in comparison to the state, yet connected to the empire because each body and meeting hall was defined by similar tastes of symmetry. “Symmetria” is thus one of the most deeply rooted and continuous features of Greco-Roman thought, philosophically, artistically and aesthetically; it forms the basis for the Roman’s aesthetic sense of form, beauty, and harmony.

Philosophy in ancient Rome was not detached intellectually but took part in dealing with every day life, with human misery. “The central motivation for philosophizing is the urgency of human suffering, and. . . the goal of philosophy is human flourishing or ‘eudaimonia.’” (Miles, 14). According to Plotinus, “controlling the body was seen as the best method for creating and cultivating a carefully designed self.” (Miles, 17) Michel Foucault, a prominent historian, claims that several centuries before Plotinus and “among certain classes educated and moderately wealthy men, carefully designed ‘practices of the self’ were used to create a consciously chosen, intentionally developed, counter-cultural ‘self.’” (Miles, 17) These activities included restrictions on diet, activity, sex, and other behaviors. Thus, among the elite at least, self-identity was intentionally created and cultivated; this kind of fine-crafting would lead to greater “eudaimonia” for the individual.

As a whole, the strength of Roman civilization in the first and second centuries laid in the very elite and aristocratic. Historian Brehier claims that the revolt of Maximinus in 235 CE “marked the beginning of an endless series of civil and foreign wars, of various calamities, plagues, and famines which continued without interruption for a half-century and which depopulated and impoverished the empire, destroying the elite. . .” and caused a decline in the level of philosophy, art, literature (Brehier, 13-14). Much of the third century was marked by turn over among rulers and poverty of the masses.

Meanwhile, Christianity was a growing religion. Early Christianity gave significant attention to the poverty of the masses and the suffering of the body. “Judith Perkins’s book, ‘The suffering self: pain and narrative representation in the early Christian era,’ argues persuasively that it was not simply the body, but more particularly, the ‘suffering’ body that became the foundation of the Christian self and the Christian church.” (Miles, 19) This was reflected in the growth of the ascetic movement, which advocated the “pleasure of no pleasure.” In sum, “the superior capability of the ‘suffering-self’ model over the ‘self-mastery’ model to multiply converts to create the Christian church is due at least in part to the perennial and democratic accessibility of pain and suffering” (Miles, 20). Christianity developed in strength partly due to its acknowledgment and attention to the suffering of the human body among the Roman populace.

Early Christian meetings were located in small Roman houses (the “domus”) or community buildings. Since Christians were hiding from persecution by the Empire, the façade was plain, the house ordinary, and the location undesirable. Constantine became the ruler of Italy in 312 CE and in 313 CE declared the Edict of Toleration in which Christianity was allowed. Constantine “gave Christians free and unrestricted opportunity of religious worship.” (The Edict of Milan) Christianity eventually became the religion of the empire and continued drawing converts; domestic architecture could no longer fulfill the needs of the meeting place for Christianity.

Christianity adopts the form of the Roman basilica and adapts it. Various reasons for adopting the basilical structure have been hypothesized by historians. Of all current Roman buildings, the basilica had the fewest ties to pagan temples. Also, it was an official building that already demanded respect of the Roman people. Most importantly, it could accommodate huge congregations of laymen and clergy. While various theories persist, the strongest argument holds that the Roman basilica was adopted primarily for functional purposes: it demanded respect and fit the spatial needs of a service. The deep connection to proportion, symmetry, and the human body in Roman society was not likely considered. 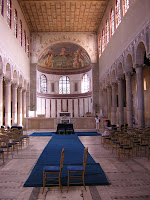 Over years the original basilica structure was adapted to accommodate the celebration of mass, create hierarchy within the church, and inspire deeper religious faith. The central aisle came to be known as the nave. It was enlarged for mass audiences and became a public assembly hall in which crowds gathered, “singing hymns and amen-ing the fervent imprecations of the preacher.” (Mathews 92) There were no pews and the crowds could swirl through the massive space and be physically involved in the service. The ceiling and floor were flat and parallel to each other, and coupled with the colonnades (rows of columns that optically appear to get smaller and move inwards), created a forward motion within the nave that directed focus to the apse at the far end (Figure 2). Inside this grand space the individual was made to feel small and unimportant; the individual was one of many taken up in the motion of the congregants and the architecture. 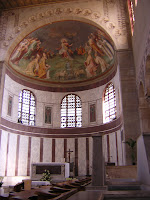 Whereas the private art in the roman “domus” was seen as “staccato”, an “interior with such a compelling directional sense required a dramatic stop. . . provided in the apse, a deep, curving niche set in an arch that panned the whole width of the nave” called for the development of powerful images (Matthews, 94). This led to the development of imagery for the apse to invite worship and inspire the congregation; often the figure at the center of the image would be Christ, Mary, or an important Saint of the church (Figure 3). Images were symmetrical, hierarchical, and frontal reflecting balance in the Christian world (Matthews, 96). The figure at the center of the image was divinely powerful: it was often the only figure in the entire basilica that did not have a balancing mirror image but carried the axis of symmetry within its own body. The central figure was paradoxically humane because the image of another human body at the focal point created kinship between the congregant and the figure. The tie of kinship and proportion between the congregant’s body, the spiritual figure, and the architecture of the basilica drew the congregant in and invited worship. The culmination was to give the congregant an all-encompassing divine yet humane experience of Christianity. 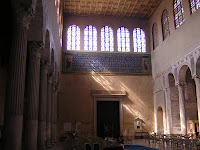 Clerestory windows allowed natural light into the church in an architecturally designated fashion. “Because light is associated with divinity, [light] forms an important element in medieval aesthetics.” (Minor, 56) Light streaming through the windows would often highlight the image at the apse and the immensity of the basilica (Figure 4). The difference between the internal, safe and cool environment and the external, uncertain and hot environment is indicated by the careful manipulation of natural light.

Some early Christian buildings known as “martyria” and were built to house the relics of martyrs or on sites of a holy place of Christ’s life on earth, his forbearers, or his followers (Ward-Perkins, 460). A martyr’s grave (“martyrium”) was originally located in the catacomb and later moved inside the basilica, often to the apse (Krautheimer, 54). The architectural plan of the church became more complex: “Constantine’s designers experimented with axial emphasis, crossed longitudinal and transeptal axes, rotundas, and octagons.” (MacDonald, 22) The transept was used to create hierarchy within the church (through the segregation of clergy and laymen). Hierarchy of seating arrangements became typical – the closer an individual was to the apse, the higher his rank, and the more powerful his spiritual experience. The location of the martyr’s grave at the apse highlighted another human body as a pivotal point of focus in the church. A divine vertical line was established between the martry’s grave, the priest (living saint) standing above, and the image of Christ in the apse. Similarly, a horizontal line was drawn from the congregant through the forward motion of the nave culminating at the vertical group of divinity. The architecture of the church and the location of significant figures in key locations were carefully designed to create a forward pull and an all-consuming experience for the congregation.

The church is pleasing and calming due to its grand yet simple principles of architecture: kinship to the human body, proportion, and regularity. The church draws on ancient and novel architectural elements to create an all-consuming bodily experience for the visitor. Architects developed different ways to direct attention in the space and encourage fervent prayer. The Christian philosophy and basilica drew in Roman society so effectively because it spoke to the suffering of the masses, pulled on the Roman aesthetic and comfort in “symmetria”, and created compelling lines of divinity and humanity between congregant, priest, and Christ.

I was originally drawn to the topic of the Christian basilica because of its connection to proportion and the human body. I was interested in ancient Roman understanding of the body’s function in life, and how that conception translated into their massive architectural feats. My academic interests have stemmed from my personal background and passion for dance; in my paper I dig for the connection between early Roman conceptions of bodies, space, and architecture.

I focused my early research on Plotinus, early Roman philosopher, and his writings on Roman society and the body and soul. As the founder of Neo-Platonism, I was led to Plato’s ancient Greek philosophy as well. Vitruvius’ treatise on architecture describes the connection between ancient Greek architecture, “symmetria,” proportion, and the human body. These were fundamental principles to early Roman architecture, as seen most poignantly in basilical buildings. I studied early Christian doctrine’s recognition of the “suffering” body in Roman society. Christianity adopted and adapted Roman basilical principles to create a novel basilica. Each feature of the Christian basilica worked to create channels of motion and an all-encompassing physical experience for the congregant.

Brehier, Emile. Trans. By Joseph Thomas. “The Philosophy of Plotinus.” Chicago: The University of Chicago Press, 1958.