The Latin word basilica was derived from the Greek “basilike stoa.” “Basilike” is an adjective meaning kingly or royal, qualifying the noun “stoa,” an open aired portico. The term basilica refers to the function of a building as that of a meeting hall. In ancient Rome, basilicas were the site for legal matters to be carried out and a place for business transactions.

Architecturally, a basilica typically had a rectangular base that was split into

aisles by columns and covered by a roof. Main features were named when the church adopted the basilical structure. The immense central aisle came to be called the nave. Side aisles were divided by colonnades (rows of evenly spaced columns). The apse is a recess or projection where the magistrate was seated or where a statue of the emperor was placed. Windows above the central aisle allowed light to penetrate inside the structure became known as clerestory windows.

Scholars disagree over the location and date of the first basilica. Early basilicas and approximate dates are the Basilic Porcia in Rome (184 BCE), Basilica Aemilia in the Roman Forum (179 BCE), and the basilica in Pompeii (second half of the second century BCE).

This short presentation took place in the Roman Forum at the site of Basilica of Maxentius and Constantine. Even after researching the immensity of the basilica previous to visiting the site, I was astounded and excited by the immensity of the stone fragments. Crossing the threshold to the site gave the visitor an idea of what a fabulous, huge building it once was. This basilica once provided a reprieve from the outside world by blocking out street noises and cooling the visitor with its shade. The construction of this basilica was begun by Maxentius in 308 CE. After Constantine defeated Maxentius in 312 CE, Constantine finished construction. The central nave measured 80x25 meters and was covered by three groin vaults of 35 m. Eight Corinthian columns of 14.5 meters supported the structure. Of the original building, three vaults of the north aisle remain. The vaults of the south and central nave collapsed in an earthquake in 847 CE. However, the floor plan remains clearly visible giving a vivid impression of its immense grandeur. The Basilica of Maxentius and Constantine is atypical due to its similarities with the architecture of Roman baths; most basilicas have flat ceilings.

Part of the reason a date for the earliest basilica is not agreed upon is that it is likely that Romans encountered the basilica in the Greek context and adopted it because it was so well suited for their legislative and commercial needs (Sear). On example of a Greek structure similar in layout was built by Vitruvius. The Greek background to Etruscan art also helps explain Rome’s acceptance of Greek art and architecture. 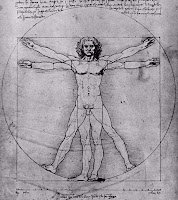 Vitruvius’ "De architectura" is the only surviving ancient treatise on architecture, likely written between 28 and 23 BCE. In it Vitruvius outlines six fundamental principles of architecture, of which two primary ones are symmetry and eurthymia. Eurythmia is broken down into "eu", good, and "rythmos", shape. Eurythmia means gracefulness that leads to visual harmony. Typically symmetry and eurythmia go hand in hand, but Vitruvius’ states that modifications to the symmetry of a work may be made in order to attain greater eurythmia. Symmetry is broken down into the roots "sym", meaning coming together and "metron", meaning measure. While today we may think of symmetry as an object with mirror images on either side of an axis, the Greek concept of symmetry was based on the proper agreement between members of the work itself. Symmetry, according to Vitruvius, is measurable, absolute, and reproducible. This is a reflection of ancient Greek philosopher Plato, who thought that measure and proportion in form will lead to beauty. Symmetry is thus one of the most deeply rooted and continuous features of Greco-Roman thought, philosophically, artistically and aesthetically.

Similarly, according to Vitruvius, the composition of the human body is such that well-shaped man has a precise relation between its members. (Rowland, 47) The most beautiful bodies were expected to be those that fall into certain measurements, proportions, and ratios. As anybody who has pulled a one Euro coin out of their pocket knows, the Vitruvian man is everywhere. The Vitruvian man is the human body inscribed perfectly in a circle to point out the correct proportions. Correct measurements are listed in Vitruvius’ drawing. Thus analysis of the symmetry of the human body correlates to the building of massive meeting halls based on similar rules of proportion.

Basilical architecture is deeply rooted in the Roman’s aesthetic sense of form, beauty, and harmony. Upon entering a massive basilica the individual will feel tiny in comparison to the state, yet connected to the empire because each body and meeting hall was defined by similar tastes of symmetry. The basilica as a symbol of authority and social order is deeply rooted in the psyche of the Roman people.