I. Historical Background of the Site or Topic 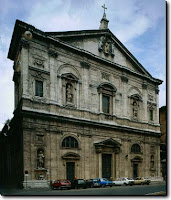 http://roma.katolsk.no/luigifrancesi.htm
San Luigi dei Francesi
Outside facade
San Luigi dei Francesi, also known as the Church of St. Louis of the French, was founded in 1518 but was not completed until 1589, due to intermittent lapses in building. Commissioned by Cardinal Guilio de Medici, the French national church was named after Louis IX, the French king who was later made a saint. The façade, designed by Giacomo della Porta, is composed of two superimposed orders of equal height. On the bottom right stands the statue of St. Louis and on both sides of the main door hang the shields linking symbols of France and Rome.

Following the general structure of a church, San Luigi dei Francesi is symmetrical, composed of a central nave and aisles on each side containing five chapels each. In front of the first chapel on the right sits a monument to the French who fell in the siege of Rome in 1849. The second chapel on the right holds Domenichino’s paintings depicting scenes of Saint Cecelia’s life, including her refusal to be sacrificed to idols, her martyrdom, her coronation by angels, and her acceptance into Paradise. At the end of the central nave is Franceso Bassano’s “Assumption of the Virgin.”

Most important to this church, aside from the tombs of many French personages, is the Contarelli Chapel, home of three of Caravaggio’s most famous Renaissance paintings. These paintings, depicting the life of Saint Matthew, include “The Vocation of St. Matthew,” “St. Matthew and the Angel,” and “The Martyrdom of St. Matthew.”