Saints held an extreme importance to the Catholic Church. Carrying enormous power, many Christians believed that with divine assistance, saints were capable of performing miracles. The only connection between the saints residing in heaven and the living Christians were relics. The word relic is derived from the Latin reliquiae, meaning remains. Quite often it was the remains of a saint that Christians used to seek help.

There are three specific categories of relics set by the Catholic Church. First-class relics are divided into two categories: physical remains of a saint, or items directly associated with the events of Christ’s life. Second-class relics were items that a saint either wore or possessed during his life. Third class relics are also divided into two categories: a piece of cloth touched to the saint’s body after his death, or a piece of cloth brought to the saint’s shrine. It is interesting to note that not all relics in each class had equal significance. Relics associated with a martyr were prized more highly than another saint, and parts of a saint that were significant to that person were more highly prized as well. 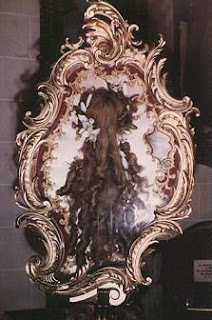 http://www2.kenyon.edu/Depts/ Religion/Projects/Reln91/Power/ Relicsmainpage.htm
St. Therese's Hair
Hair from Sait Therese of Lisieux in a reliquary
Before Christianity was “legalized” by Constantine in the early fourth century CE, Christians had to venerate the relics in secret; this veneration began very early on in the history of Christianity. In a letter regarding the martyrdom of St. Polycarp in approximately 150 CE, a Christian writes: “We took up the bones, which are more valuable than precious stones and finer than refined gold, and laid them in a suitable place, where the Lord will permit us to gather ourselves together, as we are able, in gladness and joy, and to celebrate the birthday of his martyrdom.” Once the threat of persecution was lifted from the Christians by Constantine, they were able to venerate the relics publicly. They opened tombs of saints and dispersed pieces to various reliquaries.

In the fourth century the veneration of these relics grew so strongly that it became known as the cult of relics. Miracles produced by such relics reinforced the cult following. Churches were built on or around the site of relics and Christians were often buried near the tombs of martyrs. Relics became so coveted by Christians that an abuse of this veneration developed. As authenticity of a relic was often difficult to verify, false relics were often sold to unsuspecting people, fulfilling the greed of the seller. As a demonstration of the perversion of the distribution of relics, John Calvin once remarked that there were enough pieces of the True Cross to fill a ship. In response to this abuse, it is now prohibited by the Catholic Church to divide relics into small unrecognizable parts, or to sell first or second class relics. These provisions were declared in 1563 by the Council of Trent, and stated in the Canon Law.

The veneration of relics does still continue today, though not to the extent of the past. Relics can still be found in altars in churches today. Some of the other notable relics that are found throughout the world include: Jesus’ baby blanket, Jesus’ foreskin, Jesus’ loincloth worn on the cross, pieces of the True Cross, Mary’s cloak and remains of various saints. In fact, St. Peter’s remains are at the St. Peter basilica in Vatican City. 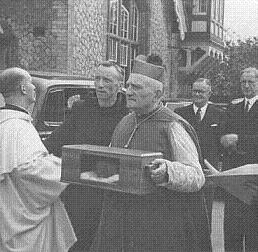 http://www2.kenyon.edu/Depts/ Religion/Projects/Reln91/Power/ Relicsmainpage.htm
St. Simon's Skull
The skull of Saint Simon being transported in its reliquary.