I. Historical Background of the Site or Topic
OPUS latin for “work”, describes the technique/method/style of connecting
building elements

During the more ancient times of 800 BCE up until 2nd century BCE, opus quadratum – a technique involving stacking large tufa blocks on top of each other – served as the Roman’s most common masonry. 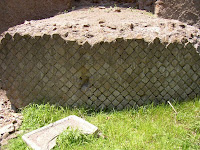 Opus Reticulatum
Everything changed post 2nd century BCE, when the Romans discovered the pulvis puteoli (present day pozzolana). Found in the town of Puteoli (Pozzuoli) neighboring Naples, pozzolana was a chocolate/red colored volcanic ash very abundant back then. Traditionally, Romans had used mixed lime, sand, and stone (or travertine, brick, marble) together with water to form concrete. With the discovery of pozzolana, Romans substituted sand with this volcanic ash, resulting in concrete that’s a lot stronger and weather-resistant (water)! Opus caementicium was the new masonry technique subsequently created that dominates wall construction from then on. It employed the new concrete as core of walls, and other materials covered the exterior for a more workable surface. The wide spread use of opus caementicium was due to two major reasons. One, the technique does not require skilled artisans to carry out; common laborers did the job quite sufficiently and at a much lower cost. Second, because of how it’s made – a mixture of lime, pozzolana, stone and water is poured in wooden formwork for shaping, after solidification the mold is removed – concrete is a lot more convenient to use when building designs involved domes and curved walls.

Five major forms of covering for opus caementicium evolved in the course of the Roman Empire. All with the exception of opus testaceum were covered with an additional thick layer of plaster. Opus incertum was the most ancient. With the burgeon of concrete in 2nd century BCE, the covering was made of pyramid shaped tufa blocks with the vertex inserted in opus caementicium. The exterior showed the pyramid bases that were randomly shaped. For the next one hundred years opus incertum evolved into opus reticulatum. The more recent technique called for a unification of the shape of the pyramid base; on the exterior walls consisted of squares that formed diamond-shaped patterns. Opus testaceum was developed and used in 1st century CE. From the outside they look like normal bricked, but in actuality the kiln-baked tiles are triangles with the hypotenuse visible and vertex set in mortar.

Opus Mixtum
Ancient Roman’s variations in brickwork confined the erection date of buildings to different periods. Moreover, brick makers between 1st century BCE and 200s CE systematically stamped their bricks with trademarks detailing current consuls. So long as the bricks were not reused in new construction, archeologists could narrow down the date through their knowledge of individual consuls. 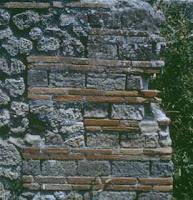