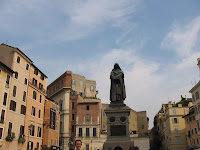 The Campo dei Fiori has been a significant meeting place in Rome for generations. The origins of its name, “field of flowers,” are not known for certain, but two different theories shed light on its history. Part of Pompey’s theater was located where the Palazzo Pio now stands, on one side of the Campo dei Fiori. The Campo could have been named after one of Pompey’s lovers, Flora, or for the fact that for many years it was neglected and became a grassy field filled with flowers. 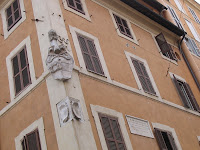 The Campo dei Fiori was paved in 1456 by Pope Callixtus III as part of his greater project to improve the Rione Parione. This improvement increased the real estate value around the Campo and lead to important buildings being erected around it, including one of the Orsini palaces. An inscription at the beginning of the Via dei Balestrari commemorates Pope Sixtus V, who further increased the value of the Campo when he built the Ponte Sisto Bridge in 1473 in preparation for the 1475 jubilee. A few years later, continued improvements were conducted under the orders of Pope Alexander V, including the enlargement of Via del Pelegrino, which linked the Campo dei Fiori with Ponte S. Angelo. Alexander V’s coat of arms on the Piazza della Cancelleria commemorates this act.

Alexander V’s motives for improving the area were probably influenced by the fact that his lover, Vannozza Cattanei, lived in Via del Pelegrino. Vannozza had four children with the Pope when he was still a cardinal, of which two have become famous in their own right. Cesare was the commander of the papal armies while his father was Pope and Lucrezia became famous for her beauty and allegedly poisoning her husband. In 1500 Vannozza bought an inn on what is now one of the corners of Campo dei Fiori. There she put up a complex coat of arms that incorporated symbols from her family and those of both her third husband and her lover, the Pope. The cow from Alexander V’s coat of arms gave the inn its name, Albergo della Vacca. 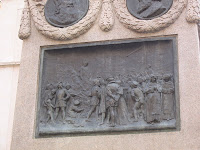 The most basic concepts of life and death have a long tradition of being powerfully displayed in the Campo dei Fiori. At one time the location of a popular horse market and the gallows, the Campo is now home to a large vegetable market and a statue of Giordano Bruno, who was burned at the stake for heresy in the center of the Campo in 1600. The market began in 1869 and the statue was erected in 1883 by Ettore Ferrari. 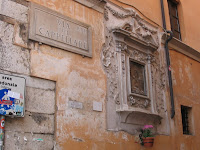 A fountain called La Terrina used to reside in the Campo, but was moved in 1924 to the Piazza della Chiesa Nuova and replaced by a similar fountain. Several madonnella can be found around the Campo. They are Catholic descendents of a practice that developed around lares, or tutelary spirits of a house, in ancient Rome. Small statues used to be placed in high places on buildings to represent the lares. Now madonnella can be found all over Rome, especially at intersections, where they guard dangerous transitions in life. One final note of interest about the Campo dei Fiori is that many of the streets around it are named after the artisans that traditionally occupied them, including the Via dei Cappellari (hatters), Via dei Baullari (trunk makers), Via dei Chiavari (key makers), and Via dei Giubbonari (jacket makers). 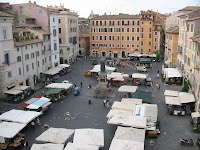