The Talking Statues of Rome

In the first half of the fifteenth century, the popes gained direct authority over the government of Rome. This was a historical milestone for Italy, as the popes now assumed the dual role of spiritual and civil leaders. Inevitably, in his role as king, the pope was soon exposed to much criticism, which was voiced by the Romans through what had become a favorite form of expression—short compositions in verse that ridiculed or blamed the popes for their poor behavior.

Nicholas V (1447-55) was one of the first popes whose action, the bloody repression of a conspiracy, was harshly criticized in a short poem:
Da quando è Niccolò papa e assassino, abbonda a Roma il sangue e scarso è il vino.
Since Nicholas became pope and murderer,
Blood is abundant in Rome while there is lack of wine.
It is important to note that the authors of these poems were anonymous and were often very close to the pope, providing them with direct knowledge of confidential information. Another poem suggested that Pope Innocentius VIII (1484-92) be given the title, Padre della Patria (Father of the Nation), because of his sixteen illegitimate children. 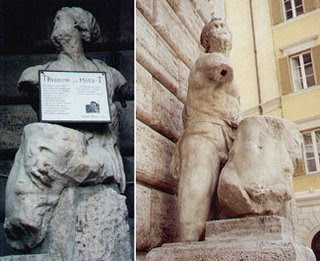 In 1501, Cardinal Oliviero Carafa put the torso of a statue representing Menelaus with the body of Patroclus in a small square near Piazza Navona after it had been dug up in the course of paving the Parione district. This location was a major meeting place during papal rule, which immediately gave the statue much exposure. Each year, on April 25th (St. Mark’s Day in 1501), the Cardinal chaired a Latin literary competition in which the poems were posted on the statue. Occasionally, however, this happened outside the competition period, and the poems became a way for the people to express their political or social discontent with popes or individuals within the government. Legend has it that an outspoken tailor named Pasquino was the first to post anti-governmental slogans on its base. In this way, the statue, who had been given the name Pasquino, became the first talking statue of Rome. An example of the use of the statue for political means involves Alexander VI, the Borgia Pope. Essentially, Pasquino accused Alessandro Farnese of being little better than a pimp for his sister: “You should attach horns to your hat…because of that slut, your sister Guilia; for that point where she meets the sixth Alexander, when she lies under him, is the point where your own life is touched.” Guilia was also mockingly described as the “bride of Christ” and was said to have given birth to at least one child of the pope. To this day, Pasquino is still used for posting messages and claims. The little square in which he still resides, Piazza di Pasquino, is named after him and pasquinata (pasquinade) has now come to be the word used for a short satire exhibited in a public place. 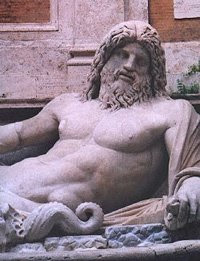 Despite his battered appearance, Pasquino soon became a popular form of political free speech as the messages hung around his neck or posted at his base spoke out about the people's dissatisfaction, denounced injustice, and assaulted misgovernment by members of the Church. Even during the conclaves, new gossips were posted every night to influence the election of the pope. Pope Adrianus VI (1522-23) and other popes considered throwing Pasquino into the Tiber, but they feared to be ridiculed by punishing an ancient Roman statue. However, severe laws were issued to stop the posting of messages, and, in 1522, Pasquino was put under strict surveillance. Before long, however, this caused the undesired result of other talking statues appearing on the scene, forming a kind of academy with Pasquino as the leader called the “Congress of the Wits” (Congresso degli Arguti). The colossal statue of a river-god at the foot of the Capitol Hill, named Marforio, became a second Pasquino. It added zest to the lampooning of the popes as Pasquino and Marforio started talking to each other through posted messages across Rome. Clemens XI (1700-21) was so interested in revitalizing the town of Urbino after it had lost its importance, that Pasquino and Marforio had this short conversation:
Marforio:- Dimmi: che fai Pasquino? (Pasquino, tell me: what are you doing?)
Pasquino:- Eh, guardo Roma, chè non vada a Urbino. (I watch over Rome, to make sure it's not moved to Urbino).
In 1679, with the excuse of preserving the statue, Marforio was moved inside the Palazzo Nuovo di Campidoglio. 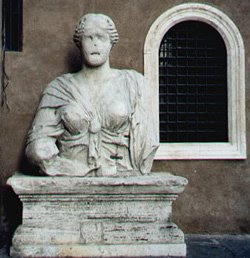 In addition to Pasquino and Marforio, the damaged marble bust of a statue of a priestess of Isis near Chiesa di S. Marco became known as Madama Lucrezia. She added a female character to the academy of the talking statues. The most famous pasquinade of hers is with no doubt:
Quod non fecerunt Barbari fecerunt Barberini.
What the Barbarians did not do the Barberini did.
The target of this pasquinade was Urbanus VIII Barberini (1623-44) who had used the bronze tiles of the Pantheon for the Canopy of St. Peter's. 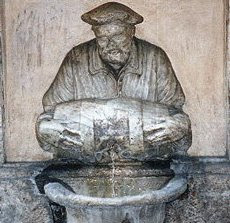 The only talking statue that is not an ancient Roman statue is Il Facchino (The Porter), located in Via del Corso near Palazzo Decarolis. He portrays a Renaissance seller of water with a small cask. This trade declined at the end of the sixteenth century when Sixtus V started reactivating the ancient Roman aqueducts.

Close to Pasquino, another talking statue of an unidentified emperor whose head belongs to a different statue is located near S. Andrea della Valle. He also talked to Pasquino and Marforio, and was commonly known as l'Abate Luigi. In addition, Via del Babbuino (Baboon) of the Strangers’ Quarter in Rome is named after an old statue of a silenus (a forest spirit, often represented as a drunken old man with the legs and ears of a horse), which was referred to in derogatory terms as il Babbuino. Its location made it an alternative site for posting pasquinades without a high risk of punishment. Il Babbuino was also used by the large community of foreigners living in the area for lampooning members of the community. 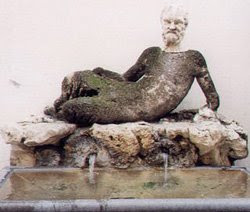 Being some of the few uncensored and independent news sources during the sixteenth to the eighteenth centuries, the people of Rome listened to the talking statues carefully. However, as freedom in the press became more widely practiced, the statues fell into disuse. Despite this, even though Pasquino and his academy are no longer used as key avenues of expressing political sentiment, they still provide entertaining and creative means by which to voice one’s opinion, no matter how scandalous it may be.