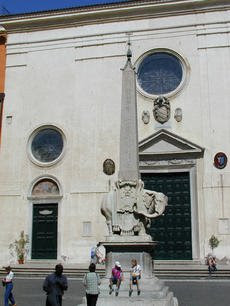 The curiously small Obelisk in front of the Santa Minerva Dominican Church is known as the “Pulcino della Minerva”, or Minerva’s little Chick. The name ‘Minerva’ arises from the fact that the church was built on the ruins of a temple dedicated to Minerva. The obelisk was discovered in 1655 in a garden belonging to the Dominican monastery. The obelisk was discovered to be one of two obelisks that was transported from Sais and was built during 589-570 BC in Egypt, the other being on display in Urbino.

Shortly after the obelisk was discovered, Pope Alexander VII began to entertain ideas for a new display utilizing the obelisk. One idea presented was done so by Father Domenico Paglia who was also an architect. His designs had the Obelisk resting over 6 small hills, as well as a dog in each corner – the dog being a symbol of the Dominican priests. The hills recalled the 6 hills also depicted on the Chigi family crest. As Alexander VII was of the Chigi family, clearly Paglia was attempting to appeal to his inner narcissist; however, Alexander actually rejected the design, stating that he wanted the Obelisk to be a “symbol of holy knowledge”.

Thus, Bernini was approached and asked to design a solution, and he presented the Pope with several designs.
One such design contained four figures, each seated at one corner of the pedestal, and each offering one hand to hold the Obelisk up. Another design showed the Obelisk resting on an ‘irregular’ rock as Hercules gives it a ‘wrestler’s’ hold to keep it vertical. One of his final early sketches depicted Hercules with his knees semi-bent as he hoists the obelisk upward and recalls Atlantis holding up the world in his position. 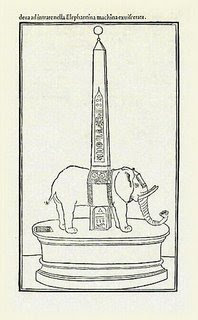 The solution eventually chosen was, of course, a depiction of an elephant holding up the Obelisk on its back. This solution was inspired by a popular and well known novel at the time, and was one of the first books actually printed in Italy. The book was titled “Hypnerotomachia Poliphili” or “Poliphilo’s The Strife of Love in a Dream” and was written by Francesco Colonna. The book was written in 1499 and included the main character meeting an elephant made of stone carrying an obelisk. A wood cut was included in the novel, that depicted a Elephant that looked very similar to the elephant obelisk.


In Bernini’s original drawings, the obelisk’s weight would actually have fully rested on the legs of the animal. However, father Paglia was envious of Bernini receiving the commission and convinced the Pope that “according to traditional cannons, no weight should rest vertically above an empty space, as it would not be steady nor long lasting”. (“Minerva’s Chick”) Bernini was very opposed to this modification, especially as he had already proven that he could accomplish such a task in his “Four Rivers Fountain” in Piazza Navona. 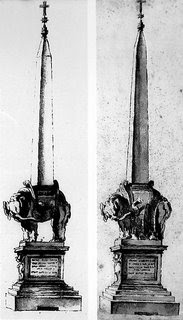 The Pope decided to add the cube to Bernini’s elephant all the same, and though Bernini attempted to disguise the heavy look of the cube by adding in a saddle to the elephant’s back, it was not entirely successful and the elephant was thus nicknamed “Procino della Minerva”, or Minerva’s Piggy because of its thick and heavy look. This name eventually changed into the obelisk’s present name of “Pulcino della Minerva” likely due to the similarities between the two words in Roman dialect.

Bernini was able to take his revenge upon the Pope and Paglia by depicting the elephant’s rear end as pointing toward the Dominican Monastery, “the tail slightly shifted to the left, in the attitude of saluting Father Paglia and the other Dominican Friars in a rather obscene way!” (“Minerva’s Chick”) The Bernini’s design was carried out by a student, specifically Ercole Ferrala in 1667 and, as per the Pope’s request, the inscription on the base reads, “… a strong mind is needed to support a strong knowledge.” (“Minerva’s Chick”)