In 1861, after years of unrest between individual cities states, Italy finally became a unified country. However, this new cobblestone nation was without identity and in political shambles until Fascist leader Benito Mussolini came to power. As Prime Minister from 1922-1943, Mussolini united Italy, more specifically Rome, into the image that the world sees today. Connecting the new Rome with its glorious past, Mussolini took advantage of his vehement charisma and power over propaganda to breed his Fascist ideals into the heart of Italy through his public projects.

Born on July 29, 1883 into a humble family from Predappio, no one expected Mussolini to be a figure to change the history of the nation. Although receiving good grades in school, he developed a defiant and boisterous nature which followed him even when he became certified as a schoolteacher. Mussolini initially embraced his socialist background of his father, Alessandro Mussolini a blacksmith and socialist activist. In 1902, unable to find a job, he moved to Switzerland to find a job and expand his political horizons. Unsuccessful, he moved back to Italy and became a political journalist. In addition, he volunteered for military service. After joining the war effort in 1915, he came to the stark realization that socialism caused more problems than it solved and continued as the editor-in-chief of his own paper Il Popolo d’Italia. Similarly, many Italians saw the fallacies of socialism as the solution to all the post war problems, setting the stage for Mussolini’s rise to power.

During the years after WWI, Russia’s Bolsheviks revolution gave much confidence to Italy’s socialist party; however the populace had a waning confidence in a revolution which led to the party’s disintegration. Following the war, Italy experienced an economic backlash that translated to an increase in unemployment and inflation lowering the confidence in the socialist part. This was not helped by the property distribution issues caused by veterans came back demanding their land. Seeing the weakness and disorganization of the liberal government set up after WWI, militant socialists took it into their own hands and used a series of worker insurrections to gain power. This social uproar through labor militancy acts and the occupations of the factory by the Red Guards did not sway the socialist party leaders to escalate the revolution onto a Bolsheviks scale. However, it was the continued economic disintegration which caused socialism to lose support; Italy was left with a desperate need for leadership.Fascism emerged as way out of a Bolshevik-like revolution in Italy. By 1922, the economic recession united 300,000 members by blaming socialism for the nation’s problems. But, not all Fascist support was voluntary. Through intimidation and violence, the squadristi, or blackshirts, gained territorial support and were even sponsored by landowners, businessmen, and the police who were often targeted by socialists. The blackshirts were often hard to control because of their radical nature, making them a threatening force to Mussolini’s authority. Later, the major squad leaders recognized his political initiative and backed him as the leader of the Partito Nazionale Fascista. With their support, Mussolini quickly climbed to the top, placing the fascist party in the election, and by all means, worked to eliminate any competition.

The fascist party staged a coup and experienced its greatest victory on October 28, 1922. Threatening civil war, an army of 30,000 squadristi marched from Milan to Rome through “the path of ancient greatness” to take the country’s capital (Scott 646). However, this group that may not have even marched was less than intimidating because most were ill-armed. Regardless of the number of men, King Victor Emmanuel conceded to avoid bloodshed and asked Mussolini to form a government. Mussolini became Italy’s youngest prime minister at the age of 39 and held office for 21 years. As an act of glorification of Rome and himself, Mussolini later described this event as a march of 300,000 men, led personally by him on horseback. This exaggeration serves as a testament to his charisma which is seen as a major theme throughout his political career in his speeches, commissioned artwork, and especially his personality. He quickly gained the support of many nationalists; Mussolini declared himself Il duce in 1926 and strategically imposed his own hyper-nationalism to create a new Italian identity. 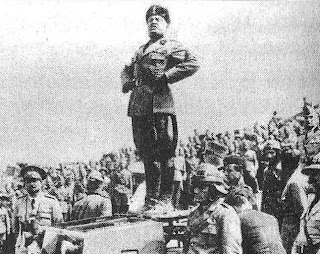 Mussolini with his ideals and political ardor revived the city of Rome, creating a grand spectacle for the rest of the world. He desired to transform the decaying city by “destroy[ing] the old to create the new and uncover the glories of the imperial past” (Painter 3). With the start of several construction projects, historical Rome rose out of the ground and the slums were torn down. In addition, identifying his own dynasty with Emperor Augustus’, he stressed the idea of romanita and recycled Roman history for his own political purposes. His obsession with Augustus brought focus and grandeur to a troubled nation, which united the people with a sense of pride to the youth, a new generation of Italians. Mesmerized by the Duce’s oratorical skills, Italians were captivated by and gave way to the fascist idea of the revival of the Italian strength, youth and energy. Winning the public, Mussolini incorporated these fascist ideals into the reconstruction of Rome.

Tearing down the slums, liberating ancient monuments, and improving the city for the modern age, Mussolini effectively used social projects to proclaim the essential fascist messages. During the late 1920s, several public construction programs of repristination that gave “older sites new fascist imprints” (Painter 7). The transformation began with excavation and demolition of the Imperial Fora. Although unveiling the key Roman Fora of Trajan, Augustus, Caesar, and Nerva, parts of these were left buried by the creation of a thirty meter wide street, Via dell’Impero, connecting the Colosseum to Piazza Venezia, Mussolini’s headquarter. But more was unveiled than lost. The superimposition of the beautiful ruins and the modern use of this street embody the notion of romanita as well as a surge into an energetic city center. On October 28, 1932, Rome celebrated the tenth anniversary of the March on Rome and the opening of Via dell’Impero. Running through the Imperial Fora, statues of the Roman emperors, and later, the four maps, this street became the site of many fascist celebrations and parades similar to the triumphal processions that took place in Roman times. Processions ended at the Piazza Venezia where Mussolini often gave speeches off the small balcony towards the roaring crowd. The glory of ancient Rome ordained the successes of Mussolini’s Rome, legitimizing his governance, as these grand parades caught everyone’s attention. Just the completion of this massive project and archeological feat empowered the fascist wave through Italy – however, the biggest propaganda piece was not added to the street until two years after the opening. 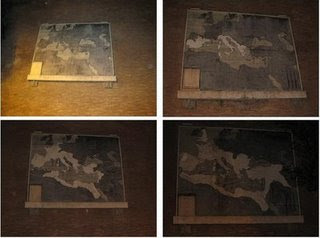 Though ordained with past artworks, Mussolini unveiled of the four maps in April 1934, on the anniversary of the founding of Rome and Fascist Labour Day, to further the idea of Fascist self-definition through its portrayal of past and present imperialism. Posted on the side of the Basilica of Maxentius, each map is about 4.6 square meters, held by two imperial eagles and made of different colored marbles to easily distinguish the sea, the Roman Empire, and the unconquered areas. The maps are arranged chronologically, depicting the 8th century BC, 146 BC, 14 AD, and 98-117 AD, so that when viewed together, one could understand the expansion of Rome throughout history. Shown in white marble, ancient Rome would move further to bring civilization and light into the peripheral lands shown by the black marble. These propagandistic maps affirmed the fascist regime in their own imperialist attitude and a fifth map, revealed on October 28, 1936, proudly displayed Mussolini’s grasp into Ethiopia. Adding to its use as a commemoratory piece, the fifth map was dedicated to fascist martyrs. Mussolini was able to impart fascist ideals even in the smallest of details while leading Italians to draw parallels with the glories of the past with the ones of their new Duce. 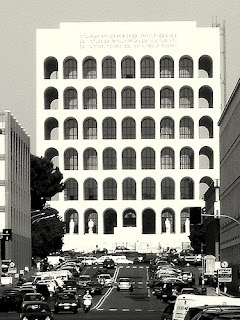 Mussolini continued to reconstruct Rome into a fascist center until WWII, extracting the grandeur of ancient Rome for his own agenda. Mussolini’s identification as the new Augustus, justified the need to canonize the ancient emperor. In celebration of Augustus’ 2000th birthday, the Piazza Augusto Imperatore was created with the restoration of the Ara Pacis and mausoleum. Followed by the construction of the Exhibit of Fascist Revolution and the EUR, Mussolini’s belief “that the glories of the past [should be] surpassed by the glories of the future” were stressed by the museum’s simple but bold architecture and the sports arena’s support for Italian strength and fitness (Painter 77). From the repristination of the monuments of Augustus to the fascist architecture of the EUR, Mussolini’s public programs exhibited the solidarity and strength of his political party and reign.

Mussolini’s use of propaganda increased as Italy entered WWII on the side of the Axis. He continued his captivating speeches, uniting Italians. Although feverishly cheering at the sound of Mussolini’s voice projecting from the balcony of Piazza Venezia, many of the people could not hear his speech about joining the war effort. Furthermore, he held a grand celebration to welcome Adolf Hitler when he visited Rome and was showed around Via dell’Impero. Ironically, German troops marched down this very street when occupying Italy at the turn of the war.

Finally, Mussolini was overthrown in July 1943 when the Grand Council of Fascism withdrew confidence in him. When executed in 1945, many of the fascist symbols such as the piccone and fascio, which represented his political projects and the idea of strength in numbers, were taken down from buildings and art around the city as well as the fifth map on the side of the Basilica of Maxentius. Likewise, many of the names of his public works were changed from their fascist façade as a symbol of removing fascism and restoring a greater Italian purpose. Via dell’Impero became Via dei Fori Imperiali and Foro Mussolini became Foro Italico. These anti-fascist sentiments unified Italy more than Mussolini was able to achieve with fascism. Though in some cases destructive, one can not ignore the amount of resources Mussolini poured into the transformation of Rome in order to create propaganda to legitimize his government and project him and the fascist revolution.
---------------------
Works Cited
Agnew, John. "The Impossible Capital: Monumental Rome under Liberal and Fascist Regimes, 1870-1943." Geografiska Annaler. Series B, Human Geography 80.4 (1998): 229-240. JSTOR. 27 Apr. 2008 .
Lyons, Carolyn. "The Empire's New Clothes For Mussolini, Rome and Architecture Became Twin Obsessions." Financial Times 25 Aug. 2007, Surveys ed.: 24. ProQuest Newsstand International. ProQuest. U of Washington, Seattle, WA. 25 Apr. 2008 .
Minor, Heather Hyde. “Mapping Mussolini: Ritual and Cartography in Public Art during the Second Roman Empire.” Imago Mundi 51 (1999): 147-162. JSTOR. U of Washington, Seattle, WA. 23 July. 2008
Posted by Lisa at 7:42 AM