“If you would feast at Cotta’s board, The baths your only chance afford To get an invitation. I never yet with him have dined My naked charms do not, I find Excite his admiration (Yegül, 1992).”
Scattered across the Roman Empire, public baths serve as a distinct mark of roman society. With small entry fees, the baths were accessible to everyone and most Romans bathed daily (Yegül, 1992). The above poem describes a man, Cotta, who others had to woo at the baths for a dinner invitation. Such invitations were common at the baths, where Romans could easily socialize (Yegül, 1992). Records exist documenting the presence of all ranks of Romans in the baths, from emperors to slaves (Yegül, 1992). According to some historians, to be Roman was to bathe (a little awkward, maybe try: “According to some historians, bathing was the defining feature of a Roman citizen.”) (Yegül, 1992). Roman cleanliness served to separate the dignified members of roman society from the barbarians, and was part of the civilizing process (Smith, 2007). To some, the body was a symbol of citizenship and societal health (DeLaine, 1999). Maintaining the cleanliness of the body meant sustaining the health of the city or state. Public funds and water went to the baths, and by one estimate, during the first century, 40 percent of water was allocated to public use, including the baths (Smith, 2007) 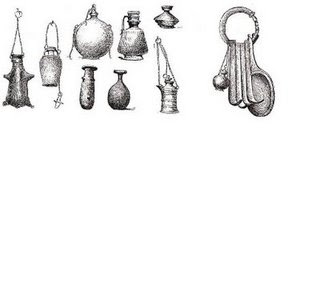 Although based off of an originally Greek idea, public baths are indisputably a symbol of the Roman Empire. The baths, which served all groups of the roman population, could be found in city centers next to basilicas, temples, and markets (Yegül, 1992). Often, many baths ran in the same city. In many cases, the bathing complexes themselves instigated the growth of stores, apartments, and markets in their vicinity (Smith, 2007). Some baths expanded into larger spas, which evolved into resorts the size of towns (Smith, 2007). Several types of business ran inside the often-enormous buildings that housed the baths. Many people found employment maintaining the baths and addressing the needs of the customers (Yegül, 1992). Most of these needs, however, were seen to by personal slaves brought along to carry such necessities as linen towels, oils, sponges, blades to scrape oil off the skin, wooden sandals, and clothes for exercising and for bathing (Yegül, 1992). Contrary to the common misconception, the Romans did not bathe naked; they also did not tend to bathe in mixed company. Women bathed in the morning hours, while men enjoyed the preferable evening bath after work and before dinner (Smith, 2007). When a woman did join men at the baths, she risked her reputation. The Emperor Hadrian even legislated against mixed bathing (Smith, 2007).

While visiting the baths, customers may have exercised and begun their bathing in the tepidarium, gone to the caldarium, and finished in the frigidarium (which contain tepid, hot, and cold water, respectively). Although this was customary, there was no set schedule for bathing (Yegül, 1992). There is much that remains unknown about roman baths. As recently as the late 1980’s it was still a widely neglected topic (DeLaine, 1999). The information gathered about the baths indicates much diversity among habits, tools, and structures, making it difficult to discern the exceptional from the typical. What historians and archeologists have been able to discover has largely come from dedication inscriptions and the remains of the now ancient buildings (DeLaine, 1999). The inscriptions describe who sponsored the baths’ building or renovation while the remains show us the foundations of the buildings.

These buildings have survived well enough to provide some idea of common shapes and materials. Though referred to as Baths here, two different labels, “thermae” and “balneae” were applied to the bathing structures. Distinguishing between the two, while often tricky and unnecessary, is basically done by size. The larger thermae, both expansive and expensive, were frequently funded by the city or state (Yegül, 1992). Balneae were smaller, less grand, and frequently received their funding from private individuals (Yegül, 1992). Baths could also be built symmetrically or asymmetrically. The latter usually describing a smaller building while the symmetrical complexes tended to have rooms going out concentrically from a circular room at the center (Yegül, 1992).

Separate rooms housed changing areas (one would not wear street clothes into the baths), pools of various temperatures, oil and massage stations, steam baths, areas for grooming practices like hair plucking, locations for academic pursuits or entertainment, and areas for exercise (Yegül, 1992). In some cases, the floors bore tiled outlines of sandals indicating the direction from one room to another (Yegül, 1992). The rooms, adorned with numerous columns and curved walls, were often of immense vertical height (Yegül, 1992). They relied on large, sometimes beautifully arched, windows for light and had vaulted ceilings (Yegül, 1992).

The decorations, detailed and rich, reminded visitors of the grandeur of the empire. Stones from around the empire tiled floors and formed mosaics while marble in rare colors brightened rooms (Fagan, 1999). Granite and concrete, a reasonably new material, also contributed to the grand structures (Fagan, 1999; Yegül, 1992). The ostentatious decorating included fountains and statues throughout bathing complexes and the silver basins and spigots adorning the plumbing (Yegül, 1992). Awe-inspiring on a different level was the innovative technology used to heat and deliver water to the baths. Heat came from volcanic springs or from the hypocaust system, by which heat originated under the floors of the baths and rose up into the water and the rooms (Smith, 2007). Water splashed into pools and fountains from the complicated aqueduct systems (Yegül, 1992).

Despite the workmanship and money put into construction, baths often fell into disrepair. Many benefactions to baths targeted restoration, repair, or expansion. However, inutility or outright danger were often required to dissuade bathers and prompt repair (Fagan, 1999). Even in facilities in top shape operated under questionable levels of sanitation. The overflowing of pools, the constant damp and warm environment, and the high traffic contributed to the filth of the baths (Fagan, 1999). The use of oil compounded the problem when the oil that had been scraped off of bodies was tossed aside, along with dead skin, and left on the floors and walls (Fagan, 1999). Providing even more concern for the cleanliness of the baths, however, was the practice of the ill bathing alongside the healthy (Smith, 2007). This habit worried Hadrian enough for him to legislate against it (Yegül, 1992).

It is important to remember, that, even though the baths are unacceptable by modern standards, they represented hygiene to the Romans (Fagan, 1999). By virtue of this association, health experts highly recommended bathing as a cure for many types of maladies (Fagan, 1999). In a society where one could fall ill and die rather quickly, and the life expectancy was quite young, health was a matter of great importance (Fagan, 1999). Ill health also bore an association with both individual and social moral dissolution, making it even more essential to stay fit (DeLaine, 1999). So it is no surprise that Romans read about health and took the advice seriously, due to concern for their personal help. This resulted in the use of the baths to prevent and cure illness (Fagan, 1999). Verification of this can be found in decorations suggesting visitation by the sick, tools discovered in the baths that could have been used for medical purposes, and evidence that doctors visited the baths to do business (Fagan, 1999).

Bathing, exercise, massage and diet all played a role in the Romans’ health, and the baths directly addressed three of these needs (Yegül, 1992). Though exercise was seldom strenuous and only broke a light sweat, it was seen as an important aspect of a visit to the baths. Men could play sports with balls, wrestle, run, box, or fence (Yegül, 1992). Women swam, or played with a stick and a large, rolling, metal hoop (Yegül, 1992). Following exercise, the Romans bathed and anointed their bodies with oils. 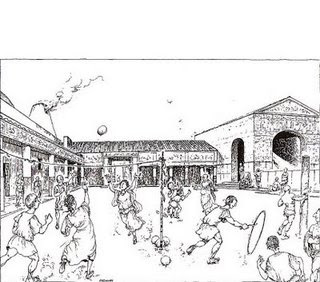 In keeping with the roman association between body and brain, the health of the mind played into the services offered at the baths. Libraries and lecture halls provided the bather a chance to read or receive information and cultivate knowledge (Yegül, 1992). Halls also housed performances by jugglers, gymnasts, and jesters (Yegül, 1992). Beyond hygiene, it is suggested that pleasure, politics, and propaganda were the primary purposes of the baths (Smith, 2007). They easily functioned as propaganda as they displayed shrines to the imperial cult and reflected the magnificence of the Roman Empire. Through these means, the baths implied that the Emperor was a provider of peace and prosperity (Yegül, 1992).

Socially, the baths afforded an environment for making friends, deals, and dinner plans. Furthermore, patronage of the baths could provide many social benefits. This illustrates a common goal of those whose philanthropy benefitted the baths (Yegül, 1992). Gifts given by individuals often went to smaller facilities. Benefactions could also be designated for maintenance (upkeep, fuel, etc), or restoration (Fagan, 1999). Such private gifts occurred more often in smaller cities and outside of Rome (Fagan, 1999). In smaller communities, women even occasionally made donations (Fagan, 1999). For private donors, the main goal could be to show attention to a civic duty (men of high rank were expected to make gifts to some public concern), to make a good name for their families, or to give their names a type of immortality or post-death remembrance through commemorative inscriptions (Fagan, 1999).

In other cases, baths opened as a profit-making business. The label, “public,” does not imply that all baths were owned by the state, but rather that they were open to the public (Yegül, 1992). Despite the very low entrance fees and high costs of running a bathing complex, owners made profits by charging vendors who worked inside the facilities and offering services for a fee (Yegül, 1992). However, profit does not seem to be the greatest motivator for creating the baths (Fagan, 1999).

According to archeologists, “the gradual decline of urban life was quickly manifested in the baths: if a town neglected the baths, it meant there were problems with its economy (Smith, 2007).” Keeping up the looks and reputation of a town provided a solid impetus to build and maintain baths. Taking it a step further, baths also served as a form of competition (Yegül, 1992). This took the form of trying to out do predecessors, a contest in which many emperors participated (Fagan, 1999). One city could also compete with another, and so could tribes. Eighteen tribes in Antioch had a standing rivalry for who could have the best baths (Yegül, 1992). Baths also established the dignity of towns by displaying their prosperity and health (Fagan, 1999).

Other state sponsorship used the baths as a tool for spreading the roman way of life (Yegül, 1992). Roman-style baths rose up in the far-reaching provinces of the empire (Smith, 2007). Roman historian Tacitus suggested that Rome brought, “the lounge, the bath, and the banquet,” to Britain. The hamman in the Islamic Mediterranean region descended from the roman bath, and Herod of Judea built roman-style baths off of his palace (DeLaine, 1999; Smith, 2007). The knowledge Romans gathered about baths, spas, and bathing later inspired the spa revival in early modern Europe (Smith, 2007). Despite the fact that there is no current counterpart, the baths of Rome inspired and required replicas and imitations across Europe and North Africa.
It is for this reason, rather than curiosity directed at a crowd of naked bathing Romans, that the roman baths remain of interest to historians. Researchers have just begun to unearth the great wealth of information to be found in and through the baths (DeLaine, 1999). Both the behavior in and opinions of the baths provide another vantage point into ancient life and will continue to serve as invaluable tools to understanding antiquity.

Smith, Virginia. Clean: a History of Personal Hygiene and Purity. London: Oxford UP, 2007.