History of the Palazzo Pio 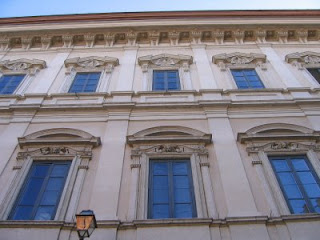 The Palazzo Pio is not simply the home of the UW Rome Center. The known history of the building and surrounding area dates back to 55 B.C. Throughout the ages, the Palazzo Pio has undergone diverse transformations and served various functions.
The first Roman theater performance was held in the fourth century B.C. Before 55 B.C., however, plays were performed in crude, makeshift structures. Strict laws regulated where and when performances were held, as well as their lengths. The Roman Republic maintained that theater was a serious threat to public morality. Roman theater was often a vehicle for political strategies, and also served as a political display of power.

During the second half of the first century B.C., the Republic faced political and ideological turmoil. Pompey the Great emerged as a victorious general and consul. He ordered the design and construction of the first permanent Roman theater: the Theater of Pompeius. It was built as a hemicycle-shaped auditorium. There was also the addition of a tall, elevated temple dedicated to Venus, which may have helped dispel antagonism toward the theater as a permanent structure. Directly behind the fixed stage of the theater was a large, rectangular courtyard called the Porticus Pompeiana. The Curia of Pompeius, which was located either close to the theater’s orchestra or at the eastern end of the porticus in line with the temple, was the site where Julius Caesar was assassinated on the Ides of March, 44 B.C. After Caesar’s death, the curia was closed and never again mentioned by Roman historians.

The theater complex was active as late as the sixth century A.D., but the next mention of the site in historical documents was in 1143. Benedictus Canonicus recorded the site as being along the route of the papal procession, which passed between Piazza Navona and the Theater of Pompeius. By the 13th century, however, the clear geometry of a theater structure was lost. The area surrounding the Palazzo Pio was referred to as “Trullum” since there was a rounded form that rose to a peak – the vestiges of the Venus temple at the summit of the theater. The structure passed through various owners, one of them being Cardinal Francesco Condulmer, the nephew of Pope Eugenius IV, who in 1450 acquired a portion of the “Trullum” which corresponds to the present day Palazzo Pio. 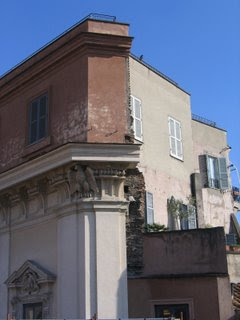 Condulmer updated the structure according to his own needs and the fashion of the day. The building came to be known as Palazzo dell’Orologio because of a large clock placed on the façade of the tower. Later owners included Cardinal Pietro Regino and the prominent Orsini family. In 1650, the Orsini family commissioned architect Camillo Arcucci to organize the building formally and spatially. Arcucci designed a three-story façade to be wrapped around the pre-existing structure. This was never finished; construction ended on the edge of the Campo de’ Fiori (photo above). The tall clock tower was removed entirely from the building.

In the 18th century, the building in its current state and appearance became known as Palazzo Pio after its owners, the princely Pio da Carpi family. The lion and eagle motif on the façade symbolizes the Pio da Carpi family heraldry. 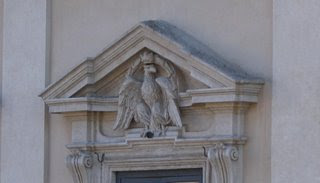 Although ownership has changed several times since then, the name Palazzo Pio has been popular retained. In the second half of the 19th century, a wealthy banker named Piero Righetti became owner of the Palazzo Pio. In the summer of 1864 restoration began on the building. The work was suspended when a gilded bronze finger, the size of a man’s hand, was found. Excavation work led to the discovery of a gilded bronze statue of Hercules in an underground room of the building. The statue measured 16 feet in height and was well preserved. Scholars believe the statue may have been hidden to protect it from the Sack of Rome in 410 A.D. This monumental discovery led to a renewed interest in archaeology. 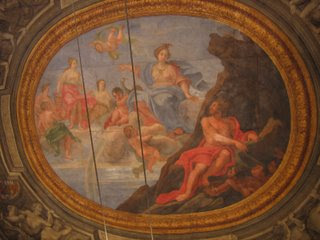 The Palazzo Pio is currently owned by an ecclesiastical institution dedicated to the care of orphans. Through the 1920’s, the building was used as dormitories, classrooms, and workshop space for orphaned boys. The society eventually reorganized and relocated its activities, and the third and fourth floors of the Palazzo Pio were abandoned and in poor condition until the University of Washington began restoration. An intriguing detail is that the ceiling of the Honors Program’s very own seminar room, which was restored by the UW, depicts a scene from Virgil’s Aeneid. The fresco depicts the goddess Juno offering the nymph Deiopea as a wife for Aeolus if he will release his winds upon Aeneas’ fleet. Also, the eagle and lion motif of the Pio da Carpi family makes another appearance in the ceiling fresco of the seminar room. In conclusion, presently the University of Washington Rome Center occupies the first, third, and fourth floors of the Palazzo Pio, a building with a rich past and promising future.