On a sunny day when one wonders off in Rome one is bound to stumble upon a fountain, one of the boundless number created throughout the ages and part of Rome’s extensive network of ancient aqueducts. One of my favorites is the Turtle Fountain or as the Italians say Fonte delle Tartarughe in Piazza Mattei. The piazza is named after the family who owned two buildings and the courtyard, this is called paganica, and it is a member of the Mattei family who sponsored the creation of the fountain. The casual observer would note that the marble fountain has a high main basin and four shell shaped lower basins and above each a bronze youth is standing with his hair blown by the wind. A careful observer would see that each boy is stepping on a fish from which mouth water pours into the shell basin below it and that each boy has an outstretched hand towards the high basin from which a turtle is stepping onto the basin edge. An expert observer would not miss that the boys are not identical; that the turtles are not touching the youths’ hands and that the fountain is made of different types of marble. 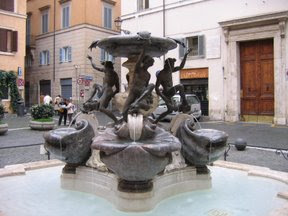 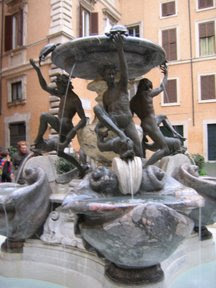 The architects of Fonte della Tartarughe are Giacomo della Porta and Taddeo Landini. Della Porta is the one who did the overall design and Landini the one who is accredited with the design and execution of the youths. The fountain was completed in 1588 and its water comes from from the Acqua Vergine, said to contain the best water of all the aqueducts. It interesting to look a bit more into the history of Della Porta (1533-1602). He is a very well known sculptor and architect. He is the one who finished Michelangelo's Dome of St. Peter's and also the one who build the two small fountains on Piazza Navona: Fontana di Nettuno (1574) in the north and the Fontana del Moro (1576) in the south.

Not many know but the turtles did not exist when the fountain was created. Originally the fountain was supposed to have eight fish – specifically eight dolphins. Four of them we still see today – the ones under the boys’ feet. The other four should have stood where we see the turtles today. They were designed, but ether never put up or taken down shortly after that. The boys stood with empty outstretched hands for about a century before the situation was remedied. In 1658 Pope Alexander VII renovated the fountain and commissioned Bernini for the job. The baroque artist ingeniously added turtles, that have just stepped of the youths’ hands. Some people argue that it was an unknown artist who added them and others that it was a student of Bernini. However given that Pope Alexander VII was an avid patron of Bernini and that the artist had used turtles in the past on other fountains, such as the Palazzo Barberini fountain, I believe that most likely it was Bernini responsible for the turtles. They are a very suitable choice, for they are marine creatures in harmony with dolphins. 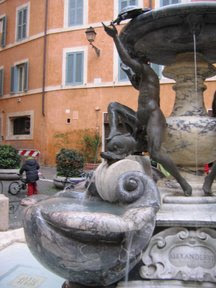 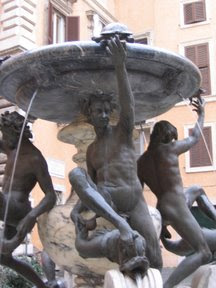 We know that the renovation was sponsored by Alexander VII by the inscription that was left on the fountain. If one stands in front of it and walks counterclockwise reading each plaque on the bottom we acquire the phrase: Alexander VII Annopontif(icatus) IV resturavit ornavitque. The latest restoration to this date has been done in the summer of 2006, when the grime and minerals that had stuck to the marble and bronze was removed to reveal the gorgeous shades of the different marble and the shinny and detailed figures of the youths, fish and of course of the turtles. 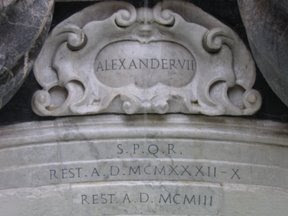 Most sources never mention the reason for the building of the fountain, there are a few however that talk of a love story, weather we choose to believe it o not is left to us. The story goes that one of the gentlemen who belonged to the Mattei family was well known for having loose purse strings. He fell in love with the daughter of a merchant and wanted to marry her, but the father would not hear of it, he did not believe that someone with no respect for money could be wealthy enough to support his child. Angry Mattei decided to disprove him. Thus he commissioned the fountain. When it was completed he invited the merchant and his daughter for dinner and they accepted. On their visit Mattei showed them the fountain and said “So, now you can see I am not poor but rich. I only do this because I love her.” Unfortunately a marriage agreement was not reached, but the fountain still stands today. Another story says that the merchant lived across the piazza from the Mattei and the daughter’s windows looked down on the fountain. She was in love with Mattei and once the marriage agreement failed she could not stand to look upon the symbol of their love, so she had her windows sealed. Today when one looks up along one of the walls on the piazza one can see two windows, which don’t look to any room, but instead are brick walls. 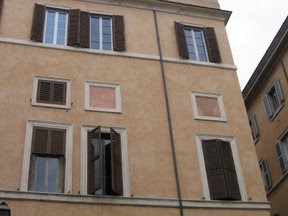 Another source with more details:
http://www.wga.hu/frames-e.html?/html/l/landini/tartarug.html
Posted by Lisa at 11:11 AM