The famed Pasquino statue derives its notoriety not only from its highly damaged appearance, but from its central role in the history of popular Roman political dissent. Currently standing in the quiet Piazza del Pasquino, around the corner from the more popularly visited Piazza Navona, Pasquino was the first of Rome’s talking statues. Like the five other talking statues in scattered locations throughout the city, Pasquino “speaks” with the caustic wit of Rome’s politically discontented. Through anonymous messages hung around its neck or taped to its base, Pasquino was one of Rome’s most popular forms of free expression.

Pasquino’s original purpose did not involve plebian protests. This statue was first discovered in 1501 by Cardinal Carafa while excavating his Palazzo Orsini. Although the statue’s face and figure had been damaged, Pasquino charmed Carafa, who had it prominently placed on the Via del Governo Vecchio. Eventually most art historians, in agreement with Michelangelo, concluded that Pasquino probably represented Homer’s character Menelaus carrying the dying Patroclo, and dated from Third Century BCE. Regardless, by prominently placing the statue near a road popularly traversed by religious precessions and commonly used for ceremonial events, official government notices began to be posted on its base.

However, the popular use of Pasquino as a site for official instructional poems was soon to be used for anti- governmental poems as well. Legend implies that the statue gained its moniker from a politically outspoken tailor named Pasquino. Allegedly, this tailor was the first to post anti-governmental statements on Pasquinos base, and others quickly followed suit. However, after two decades, the Papal government began to retaliate against opposing remarks.

In 1522, Adrianus VI put Pasquino under 24-hour surveillance to deter citizens from posting comments. Interestingly, this action only increased the number of postings. As some of the following examples show, Pasquino’s most memorable remarks are also some of the most scathing:
*note that in the Roman dialect that they are written in, statements form rhyming poetic verses

Regarding Pope Niccolo V Albergati:
Since Niccolo becomes a pope and a murderer
Blood is abundant and wine is rarer.

Regarding Pope Leone X De’Medici:
Leone was dying, but where was the sacrament?
He has sold it long ago!

Regarding Pope Urbano VII Barberini’s tax on bread to create the Fontana dei Fiumi:
We need other than fountain and spires heads,
Bread is what we want- bread, bread, bread.

Also regarding Pope Urbano VIII Barberini who stripped building materials from the Pantheon to complete St. Peter’s Basilica:
What the barbarians did not do, the Barberini did. 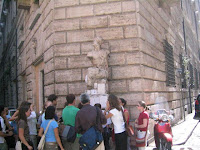 Being one of the few, uncensored and independent sources of news during Papal rule, Roman citizens “listened” to Pasquino carefully. Pasquino also mysteriously eluded the fate of other talking statues sequestered in museums to prevent free speech, for example, Marforio was transferred to the Capitoline Museum. However, as freedom in the press became more widely practiced, Pasquino gradually fell into disuse. Today, a wide variety of poems in the traditional Roman dialect can still be found on the base of Pasquino. However, since there are now numerous alternative news sources, Pasquino is no longer relied upon as a key avenue for expressing political sentiment.

http://www.virtualtourist.com/travel/Europe/Italy/Lazio/Rome-144659/Local_Customs-Rome-BR-1.html
Posted by Lisa at 11:02 AM