Baths & Bathing as an Ancient Roman

I. Introduction
Bathing was a custom introduced to Italy from Greece towards the end of the 3rd century B.C. Early Romans washed their arms and legs everyday, which were dirty from working, but only washed their whole bodies every nine days. They also swam in the Tiber. Some took occasional hot baths in the lavatrina- a room next to the kitchen. Later, when the custom of daily bathing in hot baths took hold, Romans began to build bathrooms (balnea) in their houses. In the 2nd century B.C. the first bathhouses were built. In 33 B.C. there were 170 small baths in Rome; by early 5th century that number had climbed to 856.

Baths in the Roman Empire were provided water by the extensive aqueduct systems built by the Romans. Water supplies for public baths usually took priority over water for private use. Baths that needed to, such as small baths or baths in arid areas, could function with very little water input, keeping water in reservoirs and cisterns. Other baths, in areas where water was more readily available, used a generous supply of water from the aqueducts in order to maintain their stylish displays such as fountains and cascades. During the time of Trajan (AD 100), there were nine aqueducts that supplied Rome with about 1 million cubic meters of water daily, an estimated 300 gallons per person per day. Rome has not seen anything near this impressive a supply of water until modern times. 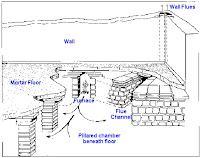