The Palazzo Pio is an impressive building, both in appearance and history. The foundation of the Palazzo dates back more than 2000 years to the time of the Roman Empire. It was around 55 B.C.E. that Gnaeus Pompeius Magnus, better remembered as Pompey the Great, a statesman and a soldier of high rank commissioned the building of the first permanent Roman Theater in the area surrounding the current Campo di Fiori. 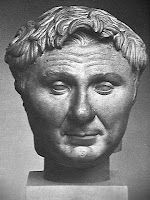 http://classics.uc.edu/~johnson/epic/
Pompey the Great
The head of Gnaeus Pompieus Magnus: a soldier, statesman and the Theater of Pompey's patron.

The Theater of Pompey was a marvel of engineering, designed to hold between twenty-five and forty thousand people and house a 260 foot-wide stage. It was in this massive theater, in a covered walkway used for strolling between the acts of performances, that Julius Caesar was assassinated on the Ides of March in 44 B.C.E. The Palazzo Pio is built upon the ruins of the Temple of Venus, a part of the theater complex. Remnants of the theater’s orchestra can be seen in the Palazzo’s curved façade along the Via di Grotta Pinta.

The Massive Theater of Pompey
A model of the Theater of Pompey, portions of which lay buried beneath the Palazzo Pio.
After the fall of the Roman Empire the Theater of Pompey remained in use until medieval times. Around 500 C.E. the structure was repaired by Theodoric, king of Gothic Italy. However, despite the restoration, by the 9th century flooding from the Tiber in addition to plundering and occupation by squatters had taken its toll and the theater was no longer recognizable.

Over time parts of the theater became incorporated into other buildings as people built into and over the area. Beginning around 1150 C.E., the Orsini family began buying out the buildings located over the Pompey site in an effort to build a powerful fortress from which they could control the road to Naples. This was a strategic move in the ongoing feud between the Orsini and Colonna families. The current Palazzo Pio was one of these buildings. The Piazza del Biscione, the smaller piazza bordering the Palazzo Pio, is named for the Orsini family’s coat of arms (literally ‘big water snake”). At this time the Palazzo was known as “Palazzo dell’Orologio” because of a large clock (“orologio”) on the façade of the Palazzo’s tower. This tower is a medieval addition that faces the Campo di Fiori. Although it was demolished, the structure was rediscovered during restoration work done by the University of Washington.

During the Renaissance the nearby Campo de Fiori emerged as a center of high culture and the Orsini family commissioned Camillo Arcucci to renovate their home. This is when the Palazzo Pio gained its current baroque façade. The building was eventually acquired by the princely Pio da Carpi di Savoia, from whom we get the Palazzo’s current name.

http://www.romeartlover.it/Vasi75ws.jpg
Vasi's Plate
A plate image of the Palazzo Pio done in 1747 by Giuseppe Vasi for his "Magnificenze di Roma Antica", a picture book for tourists.
In the mid 1800’s the Palazzo was exchanged through the hands of various owners and eventually became an institution dedicated to the care of orphans. This use continued through the 1920s. Eventually the organization moved, leaving the third and fourth floors of the building vacant. It remained this way for several decades until in 1984 the University of Washington purchased the space and restored it. For the past 20 years the Palazzo Pio has housed the University of Washington’s Rome Center where students from many different departments come to study in the Eternal City.

http://www.cerritos.edu/fac/images/rome
The Current Palazzo Pio
The Palazzo Pio as can be seen today. The baroque facade was added around the year 1650 C.E.
II. Bibliography