I. Introduction
St. Peter's has carried its richness in history for centuries. It is known to be the tallest most worshiped church in the world. However, this church is a result of the laborious reconstruction since the Constantine, and has been renovated over some 120 years of continual work under a succession of 18 popes and 12 brilliant architects. Among them, Michelangelo Buonarroti had contributed his crowning achievement as an architect, commissioned by Pope Paul III in 1546. It was perhaps the last big project before his death, and unfortunately, he was not able to see the finished project. Interestingly, the first project commissioned by the French Cardinal Jean Bilheres de Lagraulas, which made him famous at the age of 25 was also placed in St. Peter's, namely the Pieta, a marble piece of Madonna with dead Jesus on her lap. Michelangelo had finished it as promised in 1500, the year of Jubilee. He was not only a sculptor and architect during his lifetime (1475-1564), but a magnificent painter and a poet. He was considered the supreme genius of the Renaissance art. Some facts about his life can help us understand aspects of his art.

Michelangelo was born in a noble family in Tuscany. His father Ludovico di Buonarotti had sent his son to a stone carver family because his wife was constantly ill. He had hoped that his son becomes a scholar in literature, and the news of Michelangelo wanting to become an artist had made him awfully disappointed. Against all odds, Michelangelo was able to follow his passion and his geniality had soon been revealed. He was recommended to attend Lorenzo the Magnificent, and was surrounded by scholars such as Polynesian poets. He had also started studying human anatomy, and frescoes paintings. In 1495, he began to work as a sculptor and he practiced copying many of the masterpieces on his own. Later on, he had received commission on many significant art work from many different Pope. In fact, he had been a hard working man all his life. Even before his death, he was carving his sculpture in a cardboard cap while ignoring the pain from his illness.

II. Description
The word 'Pieta' means 'mercy' in Italian, and it is an artwork depicting Virgin Mary holding the dead body of Jesus Christ after his cruxification. The subject of this particular artwork is originated from the north of Alps, and has been created in many different forms and shapes by different artists and painters. Traditionally, the pieta portrays the pain connected with the idea of redemption. However, Michelangelo merely a twenty-three year old presented a stand out masterpiece of Madonna and Christ that was never attempted before. Instead of making Madonna an old sorrowful lady caressing over her dead son, a young, a rather celestial Virgin Mary radiating an acceptance of pain. Her head leans slightly forward over the lifeless body of Jesus, and her eyes looking down with slight suffering. If one looks closely, the most intense expression of her sorrow was not through her lips but her hands. Notice that she merely uses one hand namely the right hand to hold up Christ's upper body. This implies her strength and muscularity of her body which is hidden under a beautifully carved long drapery. The figures are out of proportion partly due to the difficulty of the positioning of Christ, an adult man on a woman's lap. In addition, if Jesus were to be in human scale, the Virgin would be sixteen feet tall when standing up. The body of Jesus is that of a perfect male figure, the muscle, the vein, and the nerves all depicted through Michelangelo's meticulous and creative handcraft. Every part of Christ's body is in its exactitude which must not be surprising to us considering his Excellencies in mastering the human anatomy. The marks of cruxification is limited, with a wound on his side, the small nails did not go through his feet. Hence it must be interesting to note the contrast between perfect human bodies like Jesus to an oversized body like Mary. Clearly, Michelangelo did not loose his mind when it comes to choosing the ideal size for Mary in comparison to Jesus. Perhaps it is the subtle enlargement of Mary that makes us feel the power of motherhood hovering over her dead son, thus intensifies the earthly nature of what a perfect mother figure should be. Her youth and beauty signifies the preservation of eternal youth as a virgin. Michelangelo had summarized the innovations of 15 century predecessor like Donatello, and issued a new style for the High Renaissance in the 16 century. 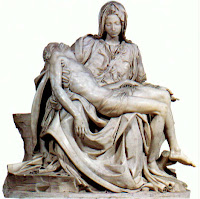 Pieta
The Pieta now displayed behind a glass case in St. Peter's
St Peter's dome is designed by Michelangelo. Unlike the Pieta, Michelangelo began the dome project at the age of 72. The most important theme that he tried to come across is the simplicity and divinity of St. Peter in the presence of light. The pointed cupola reveals the mystery of the universe, the miracle of reconciliation between God and man. Shining above, the Eternal city, and the silver grey dome radiates love of God. Most of the work was done on the lower part of the dome. He modified Bramente's Greek cross model of the interior to make it a more unified space. Around the base of the dome, he placed a colonnaded walkway next to the big windows lined up one next to the other. One top of each window, an alternating frame of triangle and semi-elliptical shapes is often used in his design. Just as a foot note, one can also observe such design on the Palazzo Farnese which he helped to design for the Farnese family. On the top of the column that is tied to the dome by beams, but no roofing between the intervals of the column. This is often used in Gothic buildings and he created huge semicircular walls echoing inside the dome to support the weight of the dome. He also replaced the sharp corners of the columns underneath the dome that supposedly support the weight of the dome. The double columns with large pediments break the wall mass over the windows. He made diagonal walls on the four corners of where the columns resided. The dome is on a high drum to give visibility of its massiveness. He had also thickened the exterior walls of the dome. From the outside, he used colossal order, meaning huge flat pilasters around the building's curves and corners to create the rippling, muscular surface. From far away, it creates a step-like movement of the cornice. The oval shaped dome that we see today was not an original intend of Michelangelo's. Regardless, the dome still symbolizes cosmological power for St. Peter who was buried underneath.

St. Peter's
Exterior of the church

III. Function
The Pieta was meant to be displayed in the St. Peter's Basilica, and was commissioned by French cardinal Jean Bilheres who wanted it for his own tomb to give grandeur to the northern European iconography. Under the contract of agreement to finish building and be unveiled in the Holy year of Jubilee, 1500. It had served its purpose of being shown to a massive group of people, such as the thousands of pilgrims at the time, who will go home and spread their news. Undoubtedly, Michelangelo had then established his reputation for the gifted artistic ability, and became quite famous. The Pieta a stone carved symbol of divine beauty had touched many people's heart. Up to this day, it still serves as a model that conveys the audience about what perfect pain is like for a mother who lost her son.
As far as the dome is concerned, Michelangelo wanted people's first reaction as they walked into the dome is astonishment. People may be overwhelmed to see the amount of light that appears at the top of the dome and will lead and draw the audience's attention slowly toward the dome. However, the sensation must only last in an instant, because he didn't want people to feel secluded from the massiveness of the dome, rather be a part of the dimension of pure contemplation.

IV. Patron
Michelangelo had had lived in Florence, his birth place, in most of his early years. The nonstop political unrest in Florence plus the invasion of the French King Charles VIII in 1494 had caused Michelangelo to move out of Florence. In 1496, Michelangelo had summoned to Rome, and the French King's envoy to the pope, Cardinal Jean Bilheres de Lagraulas had special religious interest, doubtless to King, on the ancient basilica of St. Peter's basilica, namely St Petronilla, the legendary daughter of St Peter and the patroness of the dauphins of France. The Cardinal wanted his tomb and with the statue of Pieta at this place. Perhaps he was under the influence and connection between the French dauphin patron and his own French nationality.
For the dome, Julius II was really serious in the recreation and reconstruction of the dome in 1505, which had been previously fallen into pieces. Nevertheless, many artists who made the design of the building were in total disagreement and all of them died before the construction could actually begin. It wasn't until Michelangelo who was at the time appointed by Pope Paul III, who desperately wanted the construction to begin and to be finished. Pope Paul III had always favored Michelangelo, not only because he helped to design part of his palace, but he also admired his character. In his mind, Michelangelo is a tough, hard working, and talented artist. Indeed, at the age of 72, Michelangelo had worked day and night on the project mostly because he wanted to satisfy his own inner spiritual resolution to move closer in faith and love to God. Thus, he had asked the pope to not pay him at all. Indeed, the money on this project was short because of the war in Parma. The construction still had to stop simply because he didn't have enough to pay the rest of the workers. Therefore, people in later generation regards Pope Paul III as the hero of the dome construction where in reality, Michelangelo was the one who had continued the project unconditionally. 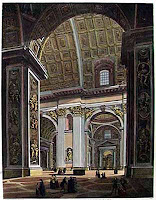 V. Conclusion
There has been many copies of Michelangelo's Pieta even in the present days. It still possesses divinity and realism as many people recognized and appreciated. St. Peter has also been a prominent design of church domes all over the world. However, it remains to be the tallest dome in the world because people wanted to preserve the uniquness and devotion to the faith of St. Peter. Today, pilgrims from all over the world are visiting St. Peter's to show their devotion and faithfulness while others are just there to enjoy the maginificent artwork of the church.

VI. Personal Observations
The most surprising thing I found in doing this Michelangelo research is that Micehlangelo died on Feb 18, 1564, which is the day of my birthday. Nevertheless, I was also impressed about the fact that he was a great poet. Here is a great poem he wrote at the end of his life journey. I thought I would share:

The voyage of my life at last has reached across tempestuous sea,
in fragile boat the common port all must pass through to give cause and account of every evil, every pious deed.