From Comitia to Curia to Church: The Progression of Politics in Space in the Forum Romanum 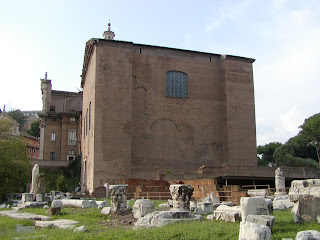 The site of the Curia Iulia, the best preserved of the ancient Roman structures in the Forum Romanum, has served several roles in several incarnations since the birth of Rome. Archaeological evidence shows the transitions of the building from the original Comitium, a temple-like building aligned with the cardinal points, to the Curia Hostilia, built by the third King of Rome as a Senate meeting place, to Julius Caesar's namesake, Curia Iulia, and to it's final incarnation as the church that kept it preserved, Sant'Adriano, although it was deconsecrated in the 1930s. These constructions follow the progressions of Roman politics from Monarch to Republic to Empire, following the changing roles of the Popular Assembly, or Comitia and the Senate in the different Roman eras.

These physical transitions occurred over a number of years. Starting around 600 BCE, the area of the Comitium, a place for public meetings and discussion, was paved for the first time (La Regina 10). A few decades later, the first Curia Hostilia in its temple-like shape was built on the complex as a meeting place for the Romans and, symbolically, their gods to make important political and military decisions for Rome (Comitium). Around 300-250 BCE, the Comitium and Curia change shape to model the circular ekklesiastéria found in Greek cities serving the similar purpose of a spot for citizens to listen to an oration. First century BCE proved the greatest century of change for the site: the consul Cornelius Sulla tore down the Curia Hostilia and replaced it with a larger Curia Cornelia for his expanding Senate. Later, around 50 BCE, Julius Caesar changed the compound and altered the placement of the Curia and Comitium, redesigning and re-appropriating the site to show the symbolic and mostly powerless place of the Senate in the new Imperial age. He died before these changes were complete but Augustus finished and dedicated the Curia Iulia in 29 CE. The building that stands today was erected by Diocletian in 283 CE after a fire destroyed much of the Forum Romanum, including the Curia Julia (Curia Julia).

Below, one can see the various locations and shapes of the incarnations of the Comitia/Curia complex over the years. http://sights.seindal.dk/sight/158_Comitium.html 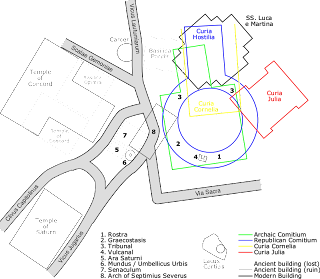 Only the latest building built by Diocletian can be seen today. It is a rectangular building that is currently brick over concrete, but it was originally faced with marble on the bottom and stucco painted to look like marble on the top. The building originally had a flat roof, but the current one is modern. One can enter it by a single flight of stairs that lead up to large bronze doors, which are replications of the originals installed by Diocletian (Curia Julia website). Light is provided by three large windows. Archaeological evidence provided by a coin found in the original doors indicates a portico on the original structure. Inside, in a single room, there are two wide steps lining the walls. These step-platforms would have been used to seat approximately 300 senators in their chairs. The marble flooring is original, and bears the design put in by Diocletian.

At the far end of the room, there was an Altar of Victory. It originally held a statue of Victoria, personification of victory, placed there by Augustus to celebrate Rome's military might, or specifically, his victory at the Battle of Actium in 31 BC (Claridge 71). This statue was removed in the 4th Century by St. Ambrose to the dismay of the few remaining pagan families in Rome. Currently, the Plutei of Trajan, two large marble carvings showing scenes of the Emperor's generosity are housed in the Curia, although they are originally from another part of the Forum (La Regina 18).

Below, one can see an artist's depiction of what the inside of the Curia Iulia would have looked like. The steps on the sides would have been lined with chairs for the Senators. http://dlib.etc.ucla.edu/projects/Forum/reconstructions/CuriaIulia_1 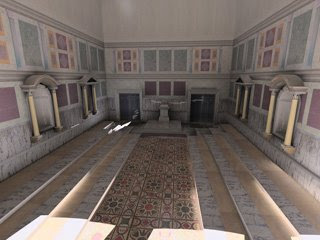 There is archaeological evidence for the earlier forms of the complex, which demonstrate the influences of their time. Up until Caesar, all of the complexes were aligned with the compass. The original Comitium/Curia complex signified the religious function of the building with a rectangular, temple-like shape. The next Comitium, with a lowered middle, provided excellent opportunity for oratoria during the Republican era of Rome, when most politics were decided by oration. Sulla's Curia Cornelia was a larger, rectangular building. Then Julius Caesar reoriented and rebuilt the Curia on top of the Comitium, symbolically and physically reducing the power of the Senate and silencing the Popular Assembly, or Comitia (Lendering).

The most important distinctions in function of the Comitium/Curia complex parallel the changes of the Roman civilization. During the Monarchical Period, the complex served a religious purpose along with its political one. This is evidenced by the temple-like shape. The power of the people and the power of the gods were combined to make political and military decisions. The Comitia or Popular Assembly met as the principle legislative assembly, theoretically electing new kings, ratifying the laws and presenting the concerns of the people to the king (Lendering).

As Rome shifted into the Republican period, the physical power of the Curia grew with the political power of the Senate, but there were still acknowledgments of the religious significance of the building. The Comitium remained as the meeting place for the Popular Assembly, where citizens of Rome could come forward and bring their concerns, while the Curia served as the administrative hub of the empire as the meeting place of the Senate. This was best evidenced by the expansion of the Curia to accommodate the larger Senate (600 members from 300) during the Republican Dictator Sulla's time as consul.

Perhaps the most striking change in function came with Julius Caesar. During his dictatorial reign, the power of the Senate, and indeed the meetings and existence of the Senate became merely symbolic, while the power of the Popular Assembly was all but extinguished as the true power was in Caesar's hands. He, and later Augustus, moved the Curia to a place in the Forum that was unimportant, a mere “appendage,” symbolizing the less important advisory role that the Senate was to play in the new Imperial Rome (Aicher). He also basically removed the Comitium, the meeting place for the Popular Assembly, altogether (Lendering). This less central location and less imposing structure would be apparent to all those who walked by, showing them the shrinking power of the Senate, and the symbolic removal of the power of the Popular Assembly. Additionally, the new location of the Curia was now aligned with the new forum Caesar had built, Forum Iulium, starting the tradition of the Emperors building forums in honor of themselves. This was significant in two ways: it symbolically placed the Curia Iulia under the power of Caesar as a part of his forum, and it also contributed to the decrease in power of the Forum Romanum as a place of government.

It is important to recognize that even though the Senate was under the control of Julius Caesar and the later emperors, they, as rulers, still had to acknowledge the privilege and fiscal influence of the Senate's 600 rich members (Lendering). It is for this reason that the Curia as a building continued to exist even though the actual legislative power of the Senate was greatly reduced. For example, Caesar's Curia Iulia had seats for only 300 of the 600 members. However, because of the long tedious process of Senate meetings, over-attendance was not usually an issue. It's questionable whether another reason for the low attendance was that the Senate realized the futility of attending the meetings. If it was overcrowded, the proceedings were moved to a larger temple across town. Having a Senate meeting place where the Emperor could present his decisions was an important way for the Emperor to prove his connections with the legitimizing body of the Roman Empire, even if their power was mostly symbolic.

It is most interesting to see how a building can convey the different meanings of the politicians in power at any given time through its orientation and shape By examining architectural evidence, we are able to catalog the progression of the building over time with its various significances. Because the building is so well preserved, it provides a window into these ancient times that is unparalleled. The significance of the building has not been lost, though the marble facing has been taken. This one building gives us an idea of how the rulers of the time used architecture as propaganda in conveying the valuable elements of their reigns.

Impressions and Reflections:
The most interesting element of this site to me was to learn about the history of the building. My first impression had been that this was a church that had been randomly shoved in the middle of the Forum, but learning about the complex history was just fascinating. One knows that there are many ways to present political ideologies, but I'd never really seen such a clear example of one put into practice. The brilliance of Caesar and the other men who changed the face of the Comitia/Curia complex was especially apparent after doing the research on this project. Additionally, it was a good site to examine the three main eras of Rome and how they changed over time.
Posted by Lisa at 9:30 AM