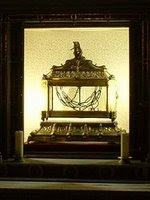 Considered one of Michelangelo’s finest works, the Moses statue for Pope Julius II’s tomb is displayed inside San Pietro in Vincoli (Saint Peter in Chains) in Rome. This basilica also houses the chains that bound Saint Peter during his imprisonments. Legend has it that when Empress Eudoxia brought the chains that held St. Peter during his imprisonment in Jerusalem to Pope Leo I as a gift, they miraculously fused together with the chains that bound St. Peter in the Mamertine Prison in Rome . The combined chain is prominently shown in a special reliquary at the high altar. 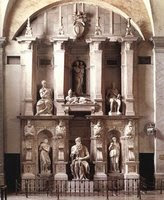 Despite being in competition with this important relic for which the church is named, the Moses statue does its fair share in attracting tourists to San Pietro in Vincoli. The impressive statue is one of the seven that make up the tomb. Flanking Moses on the left and right are the Old Testament sisters, Rachel and Leah. Rachel is in a position of prayer, representing the contemplative life, or faith. Leah, on the other hand, represents the active life or good works. These three statues are all on the lower tier and are the only ones by Michelangelo. The rather strange effigy of a reclining Julius II was carved in an Etruscan manner by Tommaso di Pietro Boscoli and is centered on the second tier. Raffaello da Montelupo, one of Michelangelo’s assistants, sculpted the Madonna and Child (top center) and the sibyl and prophet on either side. The tomb is considered a relatively large and impressive structure—until, that is, one learns of Michelangelo’s original plans.

Giuliano della Rovere became Pope Julius II in late 1503. Soon after, in March 1505, he commissioned Michelangelo to construct his tomb. At 30 years old, Michelangelo Buonarroti was already a highly regarded artist having completed extraordinary works such as the Pieta, and David statues. Michelangelo eagerly accepted the Pope’s commission and started his work on what was to be the largest assemblage of sculpture the world had ever seen. Although few primary sources remain, reconstructions from secondary sources all convey an irrationally grandiose vision for the tomb. The original plan called for over forty life-sized marble statues incorporated into a massive freestanding structure some thirty-four feet wide and fifty feet high. All the statues, including a ten-foot-high statue of Julius wearing a papal tiara, would be set in a highly detailed architectural setting of pillars, arches, and niches on three tiers. Pope Julius was equally involved in the extravagant plan for his tomb as he approved Michelangelo’s design, which was to be completed within five years. Based on what we know of Michelangelo’s method of working, no one could reasonably expect him to carve any one of the tomb statues in much less than a year.

Nevertheless, Michelangelo spent about eight months in Carrara supervising the quarrying and transport of some of the finest marble available. During this time, Pope Julius II’s focus shifted so that when Michelangelo returned to meet with him and receive reimbursement for the purchase and shipping of 100 tons of marble, he was denied an audience every day for a week and eventually not allowed entrance at all. Affronted and disappointed, Michelangelo left town seeing as his services were unnecessary now that Julius had seemingly abandoned the project. Michelangelo, however, was quickly brought back to Rome and was reconciled with the capricious pope. The tomb project was not completely abandoned, but a series of setbacks and new commissions kept Michelangelo from working on it at the pace he had started with.

The first setback was the pope’s decision to restore and remodel Saint Peter’s basilica. In doubt of finding a worthy site to put his tomb, the pope commissioned Donato Bramante to the redesign. The tremendous expense involved meant that the tomb project had to go on hold, but Michelangelo suspected that Bramante had convinced Julius that it was unlucky to have one’s tomb carved during one’s lifetime.

Bramante was also thought to have convinced Julius II to commission Michelangelo the task of frescoeing the Sistine Chapel ceiling. Michelangelo reluctantly took on this project because he knew it would mean further delaying work on the tomb and because of his lack of experience with frescoes. There was no need to worry about his inexperience, however, as the Sistine Chapel ceiling is now celebrated as one of the most exquisite pieces of art in history. Unfortunately, this masterpiece resulted in a four year break from the tomb.

Just as Michelangelo was about to return to this project, Pope Julius II passed away. Two days before he died in February 1513, however, Julius had decreed that the completed tomb was to be placed next to his uncle’s (Pope Sixtus IV) in the Sistine Chapel. He was to be buried not only under one of Michelangelo’s works, but two. In his will, he left approximately 10,000 ducats for its completion. 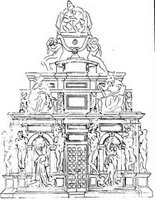 The next pope, Leo X was a Medici and had little interest in Michelangelo or, understandably, Julius II’s tomb. However, the della Rovere family did revise Michelangelo’s contract (1513) and provided him with more time and money to finish the tomb. As time went on, Julius’ successors became more and more reluctant to continue the project and the plans for the tomb went under four other known revisions (1516, 1525-26, 1532, 1542) before it was finally displayed in San Pietro in Vincoli in 1545. 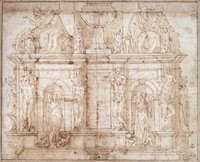 Each of the revisions involved drastic reductions to the grandiose project and it undergoes a transformation from a secular, Julius-focused monument, to a Christianized, Moses-focused monument. Rather than a freestanding structure, it was made for a wall and is currently placed so it blocks an entrance to a chapel at the right transept of San Pietro in Vincoli. During the forty years that Michelangelo worked on the tomb, he started a number of different sculptures including the Dying and Rebellious Slaves (currently at the Louvre) and several other slaves which are on display at the Accademia in Florence. The design revisions must have forced Michelangelo to leave out these sculptures from the tomb because they were too big and were left (debatably) unfinished.

The focus of the monument is obviously the nearly 8-feet tall Moses statue, front and center on the first tier. Moses is seated, looking off to his left while simultaneously holding the Ten Commandments and touching his beard with his right arm. His muscular, right knee juts out with folds of cloth draped over his thigh and left leg, which is slightly pulled back, pushing off the toes. Moses’ large, left arm rests near his stomach, at the end of a long, flowing beard. Moses is slightly disproportionate when looking at him straight on, but based on sketches, Michelangelo did this on purpose because it was supposed to be on the second tier. Viewing the Moses statue at this level would have given the illusion of correct proportions. Moses also sports a pair of horns on his head. This is because of a mistranslation of the Vulgate (not followed in the Authorized Version of the bible). Saint Jerome mistakenly translated the Hebrew word for ‘shine’ with a similar word that meant ‘horn’. Supposedly, Michelangelo knew that Moses face shone rather than was horned, but chose to include it anyway. One theory suggests that this is because in the ancient world, horns could symbolize power and divinity.

The most striking part of the statue is his facial expression. People have described his expression as angry, pensive, and foreboding, among others. The effect of his large eyes and furrowed brow are especially significant when approaching the statue from its left side, up the right aisle. There is some debate over what moment, if it is indeed just a moment, Michelangelo has chosen to depict in this sculpture. A commonly accepted idea is that Moses, after coming down Mount Sinai and seeing his people worshipping golden calf, is about to jump to his feet in anger and the tablets about to slip from under his arm.

Sigmund Freud presents an alternative interpretation. He suggests that, based on the position of the fingers and beard, Moses is actually carved at the moment where he has stopped himself from dropping the tablets and resisted the urge to throw the tablets down. He has “reached the highest mental achievement that is possible in a man, that of struggling successfully against an inward passion for the sake of a cause to which he has devoted himself.” In other words, Moses is showing self-restraint rather than giving in to his anger. According to Freud, Michelangelo carved Moses in this manner “as a warning to himself, thus, in self-criticism, rising superior to his own nature” because he realized that both his and Julius’ tendency toward violence could bring about their doom. In this respect, Moses can be argued to represent both the artist and the Pope as they were considered to have similar, “terrible” personalities.

During his reign, Pope Julius II’s main struggles involved regaining and keeping control of papal lands and driving out foreign powers in Italy. For his involvement in these battles and also possibly for his temperamental personality, he gained the nickname of the “warrior pope.” Although his uncle, Sixtus IV, had done much to try and restore Rome to its former glory, there were many parts of the land that were still in ruins. Julius II commissioned many public building projects, such as the aforementioned rebuilding of Saint Peter’s and the Sistine Chapel ceiling, to work towards advancing Rome.

If Pope Julius II and Michelangelo’s vision for the tomb, though irrational, had been realized, it would have been extraordinary. However, many of the original purposes and goals of the tomb have not been achieved. Most obviously, the purpose of being the final resting place of Julius II is not achieved either. He is neither buried in his tomb, nor in the Sistine Chapel like he desired. Instead, he was “temporarily” buried in the half-finished Saint Peter’s basilica upon his death.

Like the great mausoleums of past Roman emperors, the monument would have served as a reminder to viewers of Pope Julius II and the della Rovere family. This method of immortalizing the family name in history would have been effective for Julius II because, unlike his uncle Sixtus IV, he did not practice such blatant nepotism. In the original designs, there is evidence of more extensive symbolism for the della Rovere family in the form of acorns and oak trees (della Rovere means oak tree). In its current form, the tomb does little to promote Julius II or his family. Much of the symbolism left out after each revision and the dominant figure is Moses rather than the small, awkward effigy of Julius II. It is questionable if many of the visitors of the monument are even aware that the monument is a tomb, not to mention who it was carved for.

Whether it was on purpose or an accident, the tomb serves as a glorification of Michelangelo and his skills rather than a reminder of Pope Julius II. Guidebooks and tourists refer to it as “Michelangelo’s Moses” and, though Julius II is remembered for much of his other accomplishments, mention of his name is often lost at San Pietro in Vincoli.