Introduction to the Campo de’ Fiori 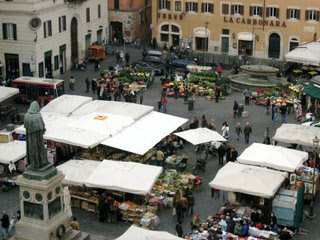 Campo de’ Fiori, which translates to “field of flowers,” was given its name for two possible reasons. Some scholars say that it gets it name because during the Middle Ages it was only a meadow with flowers. Others say that it could possibly be named for a woman Pomey had a relationship with, who’s name was Flora.

The Campo was largely unoccupied up until the 15th century. Except, in the 13th century the Orsini family purchased property along the south side. Eventually houses, towers, warehouses, and shops started appearing on the south edge of the field. By 1450, Count Everso dell’ Anguillara, an Orsini family rival, bought houses in the area as well. This purchase seemed to have signified the opening of the Campo to other important families.

The Campo de’ Fiori became of growing importance, so Ludovico Cardinale Trevisan ordered the field to be paved in 1456. It then became a place for people of all different social classes and was used for dueling, talking, buying/selling, horse racing, foot racing, lodging, and eating.

Another activity the Campo played host to was public punishment and executions. The via della Corda, which connects the Campo with the Piazza Farnese, was given its name because of this association. One of the Campo’s focal points, the statue of Giordano Bruno (executed on February 17, 1600 for heresy) is a testament to the executions that were so prevalent.

In 1858, the Campo de’ Fiori was enlarged by demolishing block housing, making room for the flower and vegetable market. The late part of the 19th century provided many enhancements, such as adding electric street lights, curbing, and a raised center. There actually used to be a fountain, La Terrina, where Bruno’s statue stands today; however, it was moved in 1889 to make way for the statue. The fountain’s inscription said, “Fa Del Ben E Lassa Dive,” which means “Do well and let them talk.” People seemed to miss the old fountain so much that a new fountain was put in the piazza, which still stands today, but has no name.

By the early 20th century the Campo was the place it is today (330 feet long and 150 feet wide). It was never designed by any specific architect; it has just managed to evolve into its present state naturally. Thankfully the daily flower and vegetable market that has been going since 1869, still happens every day.
Posted by Lisa at 10:35 AM