What is a fresco, introduction to ancient Roman painting

What is a fresco?
The word fresco originates from the Greek fresko, meaning “fresh.” The term fresco is used to describe any of several related types of painting directly onto the plaster of a wall.

The two basic types of fresco:
Buon fresco: This type of fresco, done in wet plaster, is considered the more authentic of the two types, and is also sometimes referred to as “true fresco.”
A secco: This type is done on dry plaster, meaning it also requires a binding medium (unlike buon fresco), such as egg. A secco is also used to touch up and repair buon frescoes.

A bit of history:
The earliest known examples created with the Buon fresco method date back to around 1500 BC, on the Greek island of Crete: 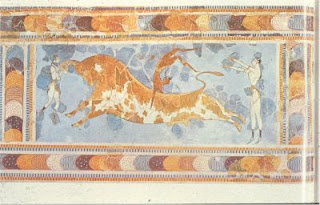 The most famous of these is “The Toreador,” which depicts a sacred ceremony in which people would jump over the backs of large bulls. Some art historians believe that fresco artists from Crete may have been bartered as part of trade exchanges, an action which shows the value of their skill at the time.

Other examples:
- The ceiling of our seminar room in the UW Rome Center,
-“The Loves of the Gods” by Annibale Carracci in the Palazza Farnese, which depicts the Triumph of Bacchus and Ariadne, the two lovers parading in a triumphal procession: 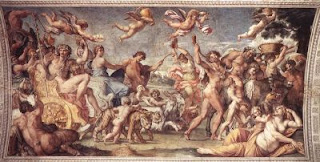 One of the most famous examples: 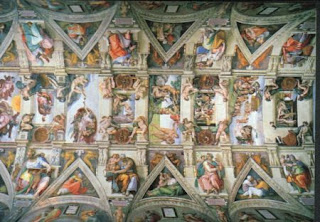 One of the most prominent examples of this type of art is Michelangelo’s Sistine Chapel ceiling, created in 1512. This piece, commissioned by Pope Julius II, depicts a myriad of biblical scenes. Because of the high skill level that was required for such a creation led Michelangelo to declare oil painting “effeminate,” a slap in the face to his contemporaries. Unlike oil painting, which could be done over long periods of time, buon frescoes had strict time constraints, forcing an artist to work quickly before the plaster dried and became permanent. If a mistake occurred, the plaster had to be chipped off (requiring a sharp tool) and that section redone completely. The unforgiving nature of damp plaster clearly displayed an artist’s skill, and for this reason, fresco painting was called “the mother of all arts” during the time of the Renaissance.

Ancient Roman painting: the four styles
Ancient Roman mural painting is distinguished by four periods, originally described by German archaeologist August Mau when he was excavating wall paintings at Pompeii. These four styles are used to differentiate between eras of building and decoration and shifts in Roman art. 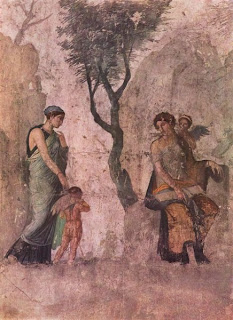 Also called the structural, incrustation or masonry style, the first style is characterized by simulation of marble and use of vivid colors, both a sign of wealth. The style was also a replica of those found in the Ptolemaic palaces of the near east, where the walls were inset with real stones and marble. The first style also displays the spread of Hellenistic culture at the time, a result of Romans conquering and interacting with Greek and Hellenistic states. Many were also reproductions of Greek paintings. 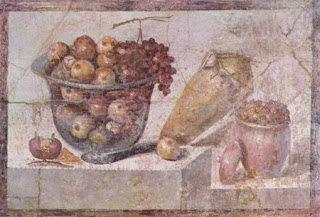 During the time of the second style of Roman painting, walls were decorated with architectural features and trompe-l’oeil technique. This technique, a French word meaning to “trick the eye,” used extremely realistic imagery to create the optical illusion that the picture itself is three-dimensional, rather than a 2-D painting. Artists would use features such as Ionic columns and stage platforms to push the plane of the picture back farther, creating a 3-D illusion. This style counteracted the claustrophobic nature of windowless Roman houses. The predominant colors in the second style were white, red, yellow, green and magenta. 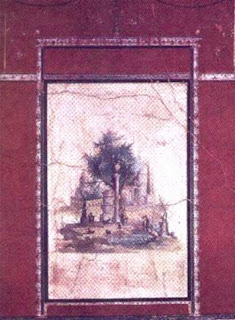 The third style was a reaction to the austerity of the period that preceded it. It was much more ornamental, figurative and colorful, and was mainly characterized by the departure from illusionistic style (though this came back into use later in the fourth style). Strict rules of symmetry were used, however, distributing elements evenly around the central focus. Pieces would be divided into 3 horizontal and 3-5 vertical sections. The 3 horizontal sections were referred to as the socle, median area and upper area. The socle would be decorated with flowers and geometrical patterns, while the median area was a subdivision of large rectangular panels with simple architectural or vegetable elements. The final upper area would consist of a continuous pattern, decorated with fantastic architectures or draperies with no internal division. 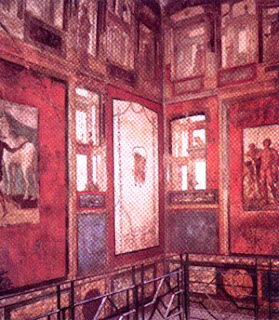 The fourth style was basically a richer, more complex phase of the third style. It also used an abundance of ornament, and was particularly popular after the destructive Pompeii earthquake in 63 AD, when reconstruction and retouching was necessary. Common themes of the fourth style were representations of open doors, windows and balconies, combined with elements of style two, such as depth and perspective. In addition, a lively emphasis on color was used.