The Colosseum: Power, Brilliance, and Brutality

The Colosseum has an elliptical shape, enabling attendees to have a good view from virtually any location. It could hold over fifty thousand spectators, with the best view available along the minor axis. This was where the emperor and his family sat. Slightly behind him were the vestal virgins sat, then the senate, the equestrian classes, and finally women and slaves on wooden seats. Seating was preassigned, as evidenced by the markings on the seating areas designating the class of people that could sit there. The seats on each level of the Colosseum also acted as architectural supports for the level above.

Another advantage for the upper classes was being able to enter and exit the stadium faster. Despite having less numbers, the exits for the upper class were larger and more easily accessible; the design of the Colosseum demonstrated effective crowd control of the lower classes. Nonetheless, the design of the exits is still very impressive as it over 50,000 spectators could swiftly access and exit the stadium.

The inner part of the Colosseum measures 620 ft long and 513 ft wide. Each of the Colosseum’s three stories has eighty arches. On the bottom floor, 76 of them functioned as general entrances with the others being reserved for the emperor, the senate, and gladiators. At the height of its use, the monument had statues in each of the archways on the second and third floors. Greek influence can be seen in the Colosseum. The first floor has Doric, or possibly Tuscan columns in between arches, the second floor has Ionic columns, and the third floor has Corinthian columns. This style of sequential complexity of the columns would be emulated by many architects in the Baroque era. The Colosseum was mostly composed of concrete with a travertine or marble coating on the outside. Some of the blocks of concrete weighed over 300 tons.

There were sockets for 240 wooden beams at the top of the Colosseum to support an awning. Sailors of the imperial fleet, who often did not have any other work to do, were stationed nearby so that they could move the awning to shield spectators from the sun.

The main floor of the Colosseum was composed of wooden blocks covered with sand. The wooden blocks could be removed to reveal an extensive underground area lit by flares. This 2-floor maze of corridors had human powered elevators that would bring wild beasts up through trap doors in the arena floor. There is a popular story about 100 lions being “magically” revealed at once.

The Flavian Amphitheatre was very much meant for the masses. The size was impressive to behold and admission was free. Free food was also given out which helped to appease the unemployed. 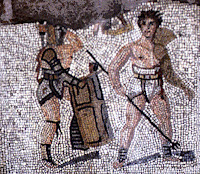 Gladiators were the mainstay of Colosseum entertainment. There were also wild animal hunts, battles between charioteers, and warm up plays with midgets pretending to fight lions. In the interim between matches, the upper classes would often go out for lunch. Executions were held to entertain the poorer classes and women remaining in the stadium.

Gladiators were usually impressed war criminals and a few were glory seekers. Gladiators usually only fought one-on-one, refereed matches. A typical day would have gladiators fighting at the very end. The bloodbath has been exaggerated; there would usually only be a few deaths a day. Gladiators wore visors and helmets to make themselves appear as more aggressive and impersonal monsters. The dead were taken out through the Arch of Libitana, named after the goddess of death.

There were many different types of gladiators. One of the most popular was the Retiarius, who only had a small shoulder shield, net, and trident. Spectators loved to watch him fight more heavily armoured gladiators as he was always the underdog.

Telemachus, a Christian monk, was stoned to death by spectators when he tried to separate two fighting gladiators. This led to an imperial decree in 404 abolishing gladiatorial combat though animal hunts and other brutal forms of entertainment would continue for many decades.

When the Colosseum was used as a quarry, so much material was carted away that a special road was set up specifically for that purpose. The function of the Colosseum later changed to a grazing ground, a fortress for an Italian baron, and later as a theatre for Passion plays when it was taken over by the church. It was used as a symbol of the triumph of Christianity over pagan traditions and preserved because of the martyrs that died inside. Restorations and excavations began again in the 1700s and continue to this day.

Changes in Function : Taken from the-colosseum.net, this timeline illustrates how the function of the Colosseum changed over time with who was in power in Rome

Vespasian was the first major emperor after Nero, the infamous emperor whose reign was characterized by excessive grandeur. After the large fire that burned down most of the city in 64 CE, Nero began construction of his Domus Aurea, or Golden House. The extravagance of the Golden House sat in the center of a 200 acre park, centered by a large artificial lake that Nero had built and a 120 ft tall gilded bronze statue of Nero himself. 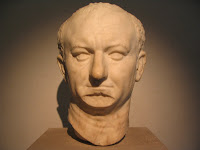 Unlike Nero, Vespasian was the son of a plebeian. He rose to power through the military and was leading a campaign in Egypt when he received the call to become emperor. He was described as a plain man with a good sense of humor. Vespasian even appeared on building sites carrying a basket of masonry to encourage builders. He restored many of the buildings that had been damaged by the neglect of his predecessors.

Vespasian cultivated the image of a common man and stressed his plebeian roots to emphasize a vast departure from the instability of Nero’s reign. The bust of Vespasian shows an older man with a receding hairline. He looks wise and deep in thought; there is no sign of immaturity or instability in his face. 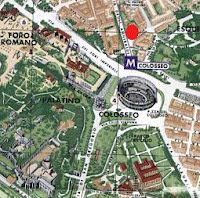 The location of the Colosseum was strategically chosen. By building the public monument over Nero’s private artificial lake, Vespasian symbolically returned the area to the people. The Colosseum is located in the middle of a broad valley in between the Palatine, Caelian, and Esquiline hills. At the time it was built, the center of urbanization of Rome had moved away from the Roman Forum and to that location. 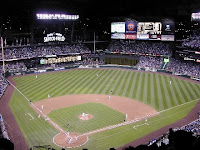 Today’s stadiums closely resemble the architecture and function of the Colosseum. The Colosseum was named after the Flavian emperors that presided over its construction much like today’s stadiums are named after large corporations or business magnates. Spectators were segregated by social class similar to how there are luxury boxes and courtside seats for the upper classes today and “nosebleed seats” for the lower classes.

The Colosseum represents the power, brilliance, and brutality of the Roman Empire. The sheer size of the Colosseum, its architectural design, and its function are still marvels to behold today. However, what took place on stage with the systematic killing of hundreds of thousands animals and people bears a grim reminder of the violence and cruelty that is core to the history of the Colosseum and the Roman Empire.

The Colosseum has always been a monument surrounded by mystery and legend. In researching this monument, I found it interesting to be able to corroborate or dispel some of these legends and see the extent to which they have been exaggerated. 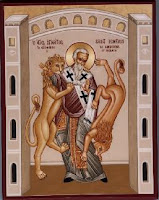 An image of the Colosseum that many of us remember is from the Jean Leon Gerome painting where vestal virgins and the rest of the crowd are screaming with their thumbs down asking the gladiator to put his defeated opponent to death. However, the thumbs down gesture may not have been entirely accurate. Some scholars believe that the gesture may have been a thumb to the throat, mimicking the path of the dagger that the gladiators would use for a swift, relatively painless execution.

Commodus, played by Joaquin Phoenix in the movie Gladiator, had his arrogant and self-important personality portrayed accurately in the movie. Commodus loved to join in the games; he would don a royal crown and cloak to make himself look like Hermes. He slaughtered thousands of animals and boasted of winning over 620 matches as a Secuter, a type of gladiator. Commodus’ fascination with strength and combat even led him to erect a statue of himself to resemble Hercules.

However, much like the movie, Commodus was a coward that was never in any danger. There would often be a large, yet inconspicuous fence separating him from the lions and tigers that he slayed. When a gladiatorial opponent managed to wrest his sword away from him and challenge him to a battle of fisticuffs, Commodus had him taken away rather than fight him.

Another mystery of the Colosseum is the flooding of the area for the staging of large naval battles. Martial describes a large naval battle being held during the inauguration. The water was 5-7 feet deep and the wooden stage was removed to flood the underground area. Recent studies give good evidence that these battles actually took place. Waterproof mortar was not used in the current underground of the Colosseum. However, there are large, unused square holes in the underground providing evidence that a different underground preceded the one we see today. Hydraulic analysts calculated that the aqueducts could not provide water fast enough to fit Martial’s description of the Colosseum filling in just one day. Historians postulate that the water was taken from a lake or river that used to be in the area. Most of the participants of the naval battle were prisoners already sentenced to death. Most of the ones that died are said to have drowned and the survivors were given mercy.

Coarelli, Filippo and others. The Colosseum. Los Angeles: The J. Paul Getty Museum, 2000.

Younger, James. The Roman Colosseum. Princeton: Films for the Humanities and Sciences, 2003.